Kim Sun-hyung finally gets a ring

Kim Sun-hyung finally gets a ring 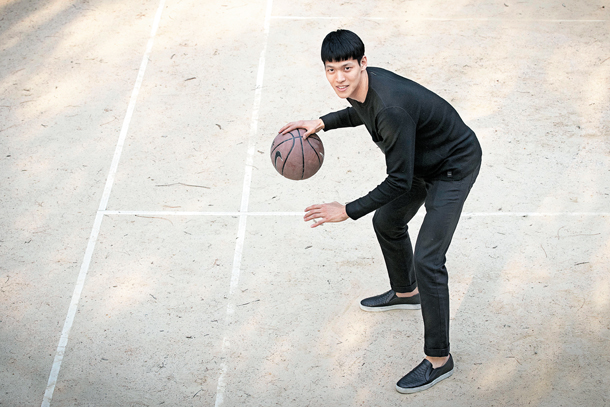 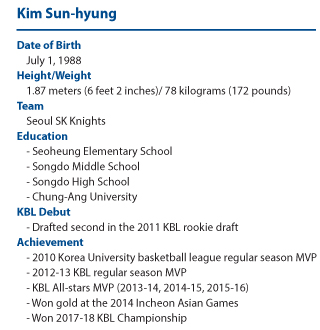 “I still can’t believe that we won,” Kim said.

During the sixth and final game of the championship series, Kim scored the Knights’ winning shot as he made one of two free throws in the last quarter. He also managed to predict the results of the playoffs.

Before the postseason began, Kim wrote on the team’s locker room whiteboard, “we’ll win the playoff semifinals with three wins and one loss, and we’ll win the championship series with four wins and two losses.”

Kim’s prediction was right on point, and he won his first-ever championship victory. Kim said he was even happier than when he won gold at the 2014 Incheon Asian Games.

“Since there hasn’t been a team that won the championship by winning four straight games after losing the first two, it’s a miracle that our team made it. We played as a team and didn’t give up,” Kim said.

Kim didn’t start his athletic career with basketball. He was a part of the local YMCA football club in fourth grade. But Kim only played football for a year, as he didn’t find the sport interesting. In sixth grade, Kim played basketball at a nearby court around his neighborhood and demonstrated much greater talent than his friends. Once his father saw Kim’s skill at shooting, he encouraged his son to take basketball seriously.

“Late at night, my father made me dribble 10,000 times,” Kim said. “In a parking garage, I dribbled with my left, right and both hands.”

Kim believes that the late-night training allowed him to develop the skills needed to become the Korean national basketball team’s dominant point guard.

After an outstanding college career in which he won the Korean University basketball league MVP in 2010, Kim got drafted second by the Knights in the 2011 KBL Rookie Draft.

Kim continued to excel as a pro, winning the KBL’s regular season MVP award for the 2012-13 season and helping the Korean national basketball team win gold at the 2014 Incheon Asian Games.

“I had a hard time emotionally,” Kim said. “I forgot how happy I was to just play basketball. It allowed me to remind myself of my original intention.”

This season, he struggled with an injury. During the Knights’ game against the Ulsan Hyundai Mobis on Oct. 17, Kim ruptured a ligament on his right ankle. He had surgery on it, which forced him to sit out 12 weeks of the season.

“I remember the trainer asking me if my career as a basketball player was over [when I got injured],” Kim said. “Thankfully, I only had to sit out for three months, but it was a rough time for me.”

Though the injury was serious and could have forced Kim to sit out the entire season, he was able to return to the court for the end of the season. Kim only played in nine games during the regular season, but the long absence allowed him to prepare well for the playoffs.

Then, for the first time in 18 years, the Knights won the KBL Championship.

“This season, I had all the ups and downs of my basketball career,” Kim said. When he was struggling with his injury, Kim said that his wife was the key to getting him to play again. Now that Kim has finished his season with a championship ring, he said he wants to take a break from basketball for a while.

“I want to travel and spend more time with my wife,” Kim said.

Though Kim is looking forward to some time off from basketball, he may not actually be able to rest for quite some time, as he needs to get ready for the 2018 Asian Games in August. The Korean national basketball team and Kim have a lot riding on their shoulders for this year’s Games as they are entering the tournament as defending champions.

Since Korea has never won two straight gold medals in the sport at the Asian Games, a victory this year would make history.

“Players like Yang Dong-geun or Moon Tae-jong led the team four years ago, but now, I need to play that role,” Kim said. “I have higher expectations this year with the addition of Ricardo Ratliffe to the national team. I really want to win a second Asian Games gold medal.”