Halsey stopping in Seoul in August

Halsey stopping in Seoul in August 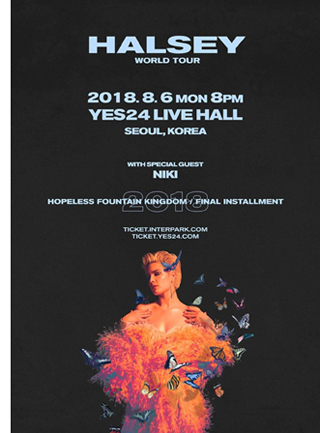 American singer-songwriter Halsey will perform in Korea for the first time on August 6.

Halsey made her name known in 2015 after her debut album sold over 1 million copies. She was an opening act for many famous artists such as The Weeknd and Imagine Dragons, and was also featured on The Chainsmokers’ hit track “Closer” and Justin Bieber’s “The Feeling.”

The singer released her second EP “Hopeless Fountain Kingdom” last year, which hit No. 1 on the Billboard 200 album chart, and recently released a remix of her single “Alone,” collaborating with renowned DJ Calvin Harris.

The concert in Korea is part of her world tour celebrating the release of her second EP. Her concert will begin with Indonesian R&B rookie musician Niki as the opening act.

Tickets will be available on May 3 at Interpark and Yes24 and the concert will take place at Yes24 Live Hall in eastern Seoul.