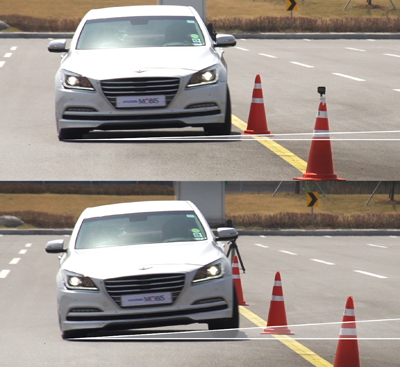 A test drive on a cornering course using eARS, top, shows a car’s improved stability compared to a vehicle without the system, below. [HYUNDAI MOBIS]

Hyundai Mobis announced on Tuesday that it developed a sophisticated new suspension technology that can help cars tackle corners without losing stability.

The suspension technology, called Active Roll Stabilization (eARS), enhances stability using electric motors both when a car is cornering and driving straight. Such systems have only previously been developed by a few European and Japanese auto parts companies and are installed on premium cars.

Hyundai Mobis said that its new eARS system can prevent car’s body from leaning to one side when going through a rapid cornering course. It also relieves shocks from rough roads.

Other types of suspensions have to be very stiff in order to enhance the stability of the car’s body when cornering. The firm suspension sacrificed a smooth ride in return.

“The eARS, however, can react flexibly on both straight roads and corners, using the electronic motors,” the company said in a release.

According to Hyundai Motor’s auto parts affiliate, it took five years to develop the eARS system to match global standards. The company says it can boost stability by 40 percent but it is 5 percent smaller than other systems.

It can be powered by standard 12V electricity as well as 48V, which is the type of voltage used for electric cars. According to Hyundai Mobis, no other eARS products can be used with both 12V and 48V.

Hyundai Mobis has been investing in R&D for diverse chassis parts for the past 15 years. It was a latecomer to suspension technology whereas Hyundai Mobis already has up-to-date products for braking and steering.

“On the back of the electronic chassis products we have developed, Hyundai Mobis will work for more stable autonomous driving systems using our radar, lidar and camera sensors,” Kim Se-jil, the senior vice president of chassis and trim parts at Hyundai Mobis.