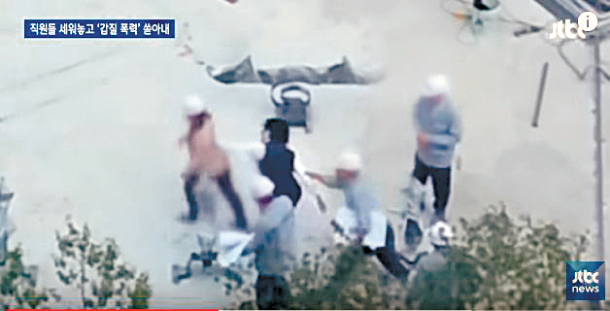 A frame from a video shows a woman in black, allegedly Lee Myung-hee, wife of Hanjin Group Chairman Cho Yang-ho, verbally and physically abusing employees at a construction site in Incheon in May 2014. [JTBC SCREEN CAPTURE]

The list of investigations into the Cho family continues to grow as the Fair Trade Commission (FTC) hops on the bandwagon and the two sisters’ mother proves that the “like mother, like daughter” adage rings true.

On Monday, a video of a woman shoving and berating employees at a construction site went viral through multiple media outlets including JTBC. The video reportedly came from a KakaoTalk chat room where Korean Air employees discuss power abuse by the owner family of Hanjin Group, which owns the airline.

In the video, the woman, alleged to be Lee Myung-hee, chairwoman of Hanjin’s nonprofit Ilwoo Foundation, wife of Hanjin Chairman Cho Yang-ho and mother of the notorious Cho sisters, flies into a fit of rage, screaming at employees, throwing documents in the area and kicking over construction materials.

The video was taken at the construction site of the Grand Hyatt Incheon Hotel in May 2014, according to the Korean Air source. Though Korean Air officially commented that it cannot verify whether the woman is Lee or not, multiple anonymous sources from the airline said it looks like Lee.

Seoul’s police agency is currently looking into the case before starting an investigation. If police find sufficient factual evidence to make Lee a suspect of habitual verbal and physical violence, it will start a formal investigation.

The fair trade watchdog has also started an investigation into Hanjin Group, announcing Tuesday that it has been investigating whether the group’s affiliates took unfair levels of profit from sales of tax-free goods on Korean Air planes since Friday last week.

The agency is looking into the possibility that Hanjin Group granted favorable deals to affiliates controlled by the owner family, though it declined to comment on details of the investigation.

It is not the first time the group has been investigated on charges of giving unfair advantages to its affiliates.

In 2016, the FTC concluded that Korean Air gave unfair levels of profit to affiliates Cybersky and Uniconverse - which were formerly owned by Cho Yang-ho’s children.

The commission fined the affiliates 1.43 billion won ($1.32 million) and referred Korean Air President and the group’s heir Cho Won-tae to the prosecution for investigation. The case is pending in the Supreme Court.

The latest two investigations - by the police and the FTC - join a rapidly growing list of law enforcement agencies looking into the Cho family. The Korea Customs Service announced last week that it is looking into accusations that the Cho family used Korean Air employees and equipment to illegally smuggle goods into the country, while the police agency is also conducting a separate investigation into accusations that youngest daughter Cho Hyun-min physically abused advertising firm employees.

The family’s rap sheet goes back even further - older daughter Cho Hyun-ah was at the center of the 2014 “nut rage” scandal, when she famously ordered a taxiing plane back to its gate because she didn’t like the way her macadamia nuts were served.

Despite apologies made by Cho Yang-ho on Sunday and a promise to remove both of his daughters from all positions at Hanjin affiliates, new reports on the family’s power abuse continue to emerge every day.

The list of allegations has become a serious problem for the airline and there is already talk of a boycott. Sources from the tourism industry say there are a growing number of inquiries from customers looking to change their booked flights on Korean Air to other airlines. Korean Air’s budget carrier Jin Air’s sales may be impacted as well.