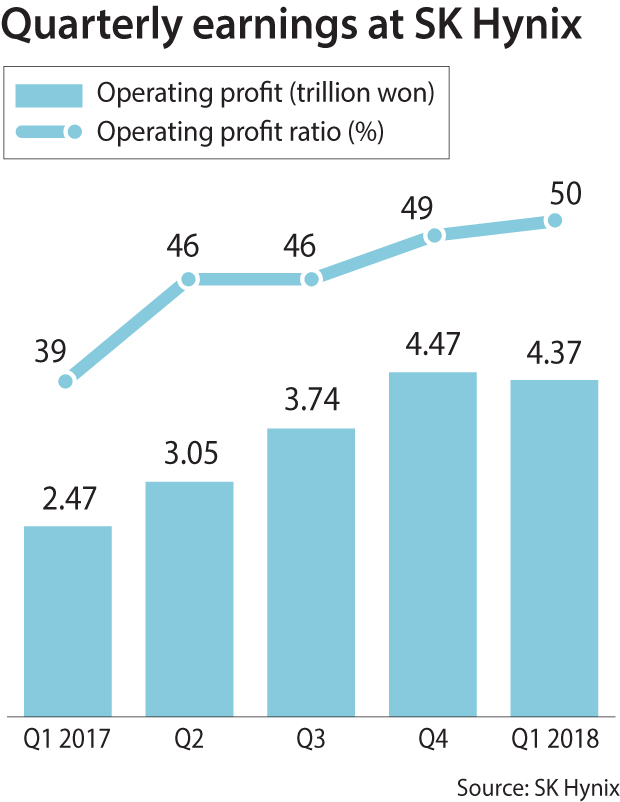 SK Hynix posted the best quarterly operating profit ratio during the January-March period in the company history, on the back of surging prices for flash memory chips.

The world’s second-largest memory chip maker reported on Tueday that it posted an operating profit ratio of 50 percent, up 11 percentage points from a year ago and 1 point from last quarter.

Operating profit during the first quarter was 4.47 trillion won ($4.15 billion), up 77 percent year on year. The company’s revenue also surged 39 percent to 8.72 trillion won over the same time span. The first-quarter operating profit is SK Hynix’s second highest, after the fourth quarter of 2017.

“Despite sustainable demand for server DRAM memory, shipments [in the first quarter] were down 5 percent from the previous quarter,” said SK Hynix in a release. “But the average price of all chip products evenly increased by an average of 9 percent on quarter.”

The price increase came from the reduced supply of DRAM flash memory amid increasing demand, mostly from tech firms in the United States and China, which are investing more in data centers. SK Hynix is the world’s second-largest producer of DRAM after Samsung Electronics, and DRAM makes up more than 90 percent of its revenue.

Lee Myung-young, the company’s executive vice president and head of corporate support, said in a conference call Tuesday that DRAM demand is expected to grow in the 20 percent range this year, propped up by the widening server market, despite slowing demand for smartphones.

“Supply won’t be sufficient to meet the demand,” he said.

The researcher “slightly revised down its revenue forecast for 2018 and the coming years, but it’s still an all-time high,” said Rachel Young, associate director at IHS Markit.

For NAND flash memory chips, solid-state drives for enterprise buyers will drive the demand, SK Hynix projected. Production of multiple-layer 3D NAND memory is expected to increase, along with demand for high-capacity SSDs. Eventually, high-capacity enterprise SSDs will make up half of the demand for SSDs by the end of the year.

The chip-making arm of SK Group has been seeking to boost its power in NAND memory by joining a consortium led by American private equity firm Bain Capital that signed a deal last September to acquire Toshiba Memory, the inventor of NAND flash technology. But the deal is dragging past its March deadline, as China has been delaying its antitrust approval. SK Hynix did not mention the issue in a conference call.

The company said it has yet to pin down its investment plans for the year but anticipates that investment will increase by more than 30 percent from last year’s figure, which was 10.3 trillion won.

“Investments in research and development have been on the rise, depending on the degree of difficulty in the manufacturing process, and expenditures on fabrication tests have also been increasing,” said Lee.