Say Sue Me blazes its own trail

Say Sue Me blazes its own trail 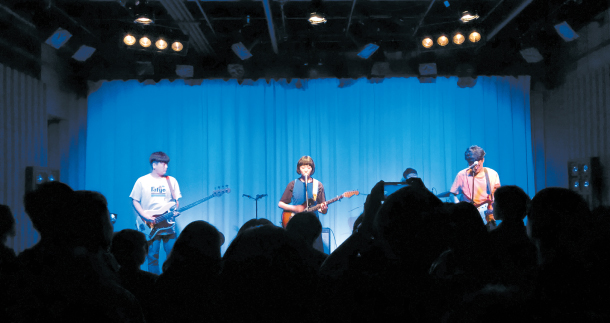 Say Sue Me performs at the launch show for their new album, “Where We Were Together,” at Veloso in Mapo District, western Seoul, on April 13. [JIM BULLEY]

Korea is no stranger to a ’90s throwback. The legions of boy and girl groups with matching outfits and stylized choreography are often eerily reminiscent of the pop music that dominated that decade, but one Korean group has embraced the ’90s in a very different way. Say Sue Me, a Busan-based band whose second album was released last week, is a group of dedicated students of early indie rock music, but with a decidedly Korean twist.

It’s difficult to pinpoint exactly what Say Sue Me’s sound is. The band’s record label often refers to it as surf rock - conjuring up the jingly-jangly sounds of The Beach Boys and Dick Dale - and while Say Sue Me can jingle and jangle with the best of them, they have much more to offer.

At times moody and melodic, but just as often upbeat and giddy, Say Sue Me’s music is brought alive by singer Choi Su-mi’s sharp and witty interpretation of an often glum life. “You are so late tonight, I couldn’t stay sober, I needed to do something, so I am quite drunk,” she sings over a melodic bassline in “Sorry That I’m Drunk.”

Whatever Say Sue Me’s sound is, it’s working. After playing a number of venues at SXSW in Austin, Texas, last month to rave reviews, the band has just embarked on a European tour. Their new album, “Where We Were Together,” is more polished than their eponymous album compiled last year. Some of the rawness is gone, but Choi’s lyrics are as captivating as ever. The second album also sees her singing in Korean on a few tracks for the first time - although she admits “it’s harder to sing in Korean than English.”

“Where We Were Together” often has a more melancholy feel - hardly surprising as the entire album is a tribute to the band’s original drummer Kang Se-min who was injured while the record was still in production and is now recovering from a semi-comatose state. The tracks were also mainly written in the winter, which guitarist Kim Byung-gyu admits makes the music “more mellow and mid-tempo.”

The Korea JoongAng Daily talked with Choi, Kim Byung-gyu, bassist Ha Jae-young and drummer Kim Chang-won before their album launch show on April 13. The following are edited excerpts from the interview. 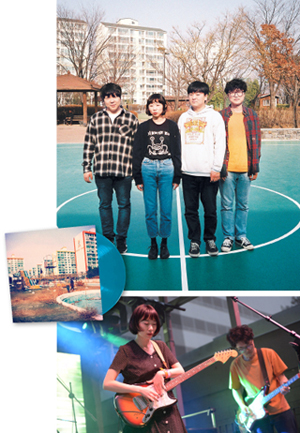 Q. Say Sue Me is often described as “surf-inspired rock.” Do you think that being a Busan-based band helped shape your sound?

A. Kim Byung-gyu: Actually, we didn’t intend to play in that style, but I think surf music has definitely influenced us. Our practice room is really close to the beach, so our sound is a natural reflection of that lifestyle. Once you get here, you might be able to guess that.


Is the music scene in Busan very different? How does it compare to Seoul and other places you have traveled to?

Ha: Busan musicians don’t play to gain popularity. There are a lot of people making great music here, but there isn’t much of a following for them. When we do play in pubs, the audience is drinking, dancing and enjoying our show, so we think they are pure rock and roll souls. The crowds are small though, so we just love music and try to find the best way to enjoy ourselves through it.


How does it feel to be making your music in a country with such an overwhelmingly strong pop music scene?

Ha: I have never thought about K-pop affecting us. We just do what we like in the place where we were born. It would be better if more people were interested in rock and roll, but they all have their own tastes and it seems quite difficult to broaden their scope of interest.


How does the underground music scene in Korea compare to that of other countries you have visited?

Choi: What amazed me about the audiences in Britain and the United States was that they were so big and enthusiastic. They have strong performance cultures that have developed over a long period of time. Busan, on the other hand, hasn’t had the time to grow something similar.

There is no platform for rock music, no promoters or venues. We think that if we and other bands keep making music diligently, people will naturally become more interested in the music scene as they learn more about it. 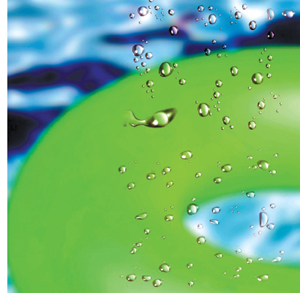 Say Sue Me’s album, “Where We Were Together,” was released on April 13. [SAY SUE ME]

What are your influences?

Kim Byung-gyu: The weather is a big influence on how we write. Korea is a country with such dramatic seasons that it seems to pull our music in different directions accordingly. When it’s hot, we don’t really care for slow music. We want to hear and play something more exciting. In the winter, though, if we listen to fast music, we feel like we’re going crazy, so our music becomes more mellow and mid-tempo.

Choi: My lyrics are heavily influenced by people around me. After all, all my feelings arise from my relationships with other people.


Your first album was mostly in English. Was that an intentional attempt to appeal to foreign fans? Your music is now shifting more towards Korean - are you hoping to grow your local fan base?

Choi: We didn’t think about growing an international audience at all. We just did what came naturally to us, and luckily, we’re getting a good response overseas. The reason I switched to writing more Korean lyrics was - well - we’re Korean! Besides, we’d like to appeal more to audiences at home.


In English, your lyrical style often sees you repeat simple phrases or ideas throughout the song. Is it the same in Korean?

Choi: Not really. It’s not that the sentences are longer, but they’re less repetitive. But it is so hard to write in Korean, for me it’s easier to write in English.


Apart from language, how else has your music changed?

Choi: We wanted to differentiate it from our other releases, so we recorded more meticulously and included more mid-tempo tracks than in the past. This might be a reflection of Byung-gyu writing much of the music in the winter months.


Has playing at SXSW last month increased your popularity at home?

Ha: Playing at a festival as big as SXSW has helped our careers, and we feel that people in Korea are getting more interested, little by little. But I think that if you keep playing good music no matter where you perform, people will be interested.

Can we expect a Korea tour any time soon?

Kim Chang-won: We’re scheduled to perform at a couple of festivals, and we’re planning to do a nationwide tour for the first time in July.