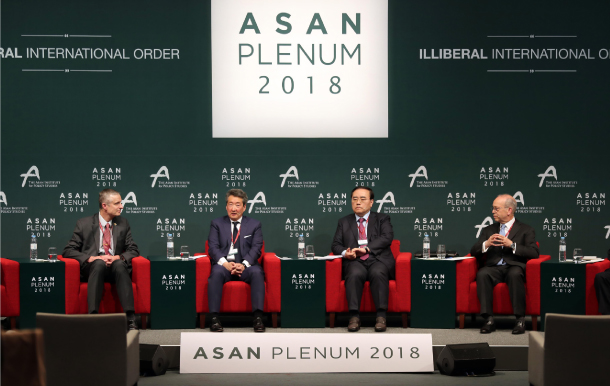 Panelists discuss the U.S.-South Korea alliance at the Asan Plenum in central Seoul on Tuesday. The two-day conference was organized by the Asan Institute for Foreign Policy based in Seoul. [YONHAP]

With a summit between North Korean leader Kim Jong-un and U.S. President Donald Trump expected to take place in a few weeks, it’s important to anticipate outcomes that are as out-of-the-box as the leaders themselves, according to Bruce Bennett, a defense expert at RAND Corporation.

Speaking at a panel on the U.S.-South Korea alliance at the Asan Plenum in central Seoul on Tuesday, Bennett suggested that Kim could go as far as asking the United States to extend its nuclear umbrella, which now covers U.S. allies such as Japan and South Korea, to also include North Korea in exchange for denuclearization.

Another possible agreement, Bennett said, is that Kim might say, “I really want to demonstrate a change in relationship. So will you put some American troops in North Korea?”

“I’m not expecting him to do that,” Bennett said, “but what if he did? … We ought to be prepared for that kind of transition.”

Daniel Russel, a former assistant secretary of state for East Asian and Pacific affairs, also expressed uncertainty about the outcome of the summit, whose date and location have yet to be announced. In particular, he said, the North’s goal is to take advantage of the differences between the United States and South Korea.

“There’s a bit of a love triangle,” Russel said. “The North Koreans have always focused on the United States, [South Korea] has focused on improving relations with the North, and the U.S. has sometimes veered one way, sometimes the other. The basic approach that is going to be put under great stress is the unified field approach.”

The meeting between the U.S. and North Korean leaders, which would be the first of its kind, would come after the third inter-Korean summit this Friday at Panmunjom in the demilitarized zone between the two Koreas, where Kim will meet South Korean President Moon Jae-in.

While the Moon administration has described the inter-Korean summit as setting the stage for a landmark U.S.-North agreement - which may involve a peace treaty to formally end the 1950-53 Korean War - Trump could break from Moon’s peace initiative if the talks fail.

“That’s the danger of doing a summit so quickly,” said Victor Cha, a former White House National Security Council official and Korea chair at the Center for Strategic and International Studies, discussing the possibility of Trump once again considering limited U.S. military action against North Korea. “It could not go well at all, in which case the only thing beyond the summit is a cliff.”

Bennett noted that the greatest challenge for U.S. officials is whether to take North Korea at its word, given that the country has walked away from or violated several nuclear agreements in the past.

Though unconventional, Bennett explained, such a move could appeal to the United States and South Korea. The North’s stockpile would be slightly reduced, and Kim could proudly show off his completed nuclear weapons technology.

Further imagining a best-case outcome from the talks - in which North Korea agrees to dismantle its entire nuclear stockpile - the panel raised the question of whether a joint U.S.-South Korean military force would be needed.

Responding to the possibility that the U.S. Forces Korea would defend East Asia more broadly rather than focus on North Korea, Cha expressed doubt about South Korea’s willingness to stand up militarily to China, which is in conflict with several countries in the region over territorial claims in the South China Sea.

“A resolution of the problem on the peninsula would bring into stark relief the China problem in the U.S.-Korea alliance,” Cha said.

The two-day conference, which ends today, was organized by the Asan Institute for Foreign Policy in Seoul. On the theme of “Illiberal International Order,” it hosted nearly 100 former government officials and scholars such as Mark Lippert, former U.S. ambassador to Korea; Evans J.R. Revere, former U.S. diplomat and an official in the George W. Bush administration; and Obama administration officials Gary Samore and Charles Kupchan.