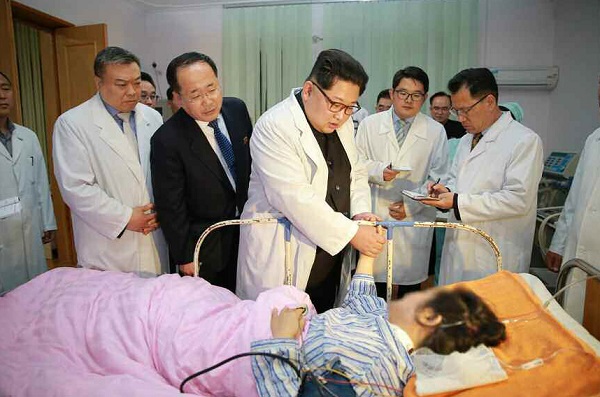 The Rodong Sinmun, the official mouthpiece of North Korea’s Workers’ Party, reported on Tuesday that North Korea leader Kim Jong-un, center, consoled a Chinese tourist who was hospitalized after being injured in a bus accident in North Korea. [YONHAP]

North Korean leader Kim Jong-un visited the Chinese Embassy in Pyongyang to express his "deep sympathy" over a bus accident that killed 32 Chinese tourists on Sunday in North Hwanghae Province, just above the border with South Korea, according to Pyongyang's state media Tuesday.

The North’s Korean Central News Agency (KCNA) said Kim made the visit on Monday at 6:30 a.m. as the "unexpected accident brought bitter sorrow to his heart and that he couldn't control his grief at the thought of the bereaved families who lost their blood relatives," according to an English report.

KCNA did not mention any details of the accident, including its cause, location or how many casualties occurred. Instead, the North's official mouthpiece emphasized the leader's grief and traditional bond between the allies.

As Kim Jong-un prepares for two major summits with South Korea and the United States, some analysts believe he didn't want the accident to put a dent into recently restored ties with China. They say Kim needs Beijing's backing to gain negotiating power for when he talks with U.S. President Donald Trump in May or June.

"I think he was determined to show the fastest reaction that a supreme leader could give," said Koh Yu-hwan, professor of North Korean studies at Dongguk University. "It's Kim Jong-un's style of unconventional diplomacy."

A related article ran on the front page of North Korea's official newspaper, Rodong Sinmun, on Tuesday, along with four photos showing Kim visiting injured Chinese tourists at a hospital and his meeting with China's top envoy to Pyongyang. In the picture with the ambassador, Kim wore a dour look on his face.

Lu Kang, a spokesman for China's Foreign Ministry, said Monday in a regular press briefing that a "major accident" led to the death of 32 Chinese tourists and four North Korean tour group staff, while two additional Chinese nationals sustained serious injuries and were in critical condition. The official offered no explanations about the accident, but some Chinese outlets reported that a bus carrying the Chinese tourists and North Korean staff overturned.

"The DPRK side also takes this case very seriously," said Lu, referring to North Korea by the acronym of its official name, the Democratic People's Republic of Korea. "China and the DPRK are also cooperating closely on other follow-up matters, including investigating the cause of the accident … it is not very convenient to disclose more until solid facts are established via investigation."

The Chinese Foreign Ministry dispatched a task force and medical experts to North Korea on Monday to work with authorities there on rescue operations and medical treatment, said Lu.

KCNA described China's ambassador to Pyongyang, Li Jinjun, as "hardly repressing his deep impression" over the fact that Kim visited the embassy at dawn despite the leader's busy schedule, saying he would "immediately report" to Chinese President Xi Jinping about it.