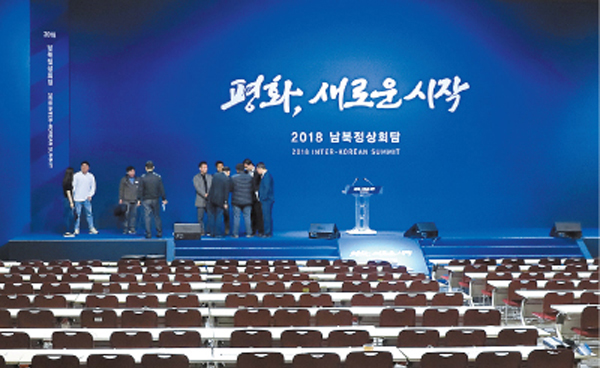 Government officials on Tuesday check the press center at Kintex in Goyang, Gyeonggi, a western suburb of Seoul, for the third inter-Korean summit Friday. [YONHAP]

The Blue House on Tuesday held a rehearsal at the border village of Panmunjom for the historic meeting to take place on Friday, going over things like the expected walking routes of the two Korean leaders.

The rehearsal, led by Im Jong-seok, chief of staff for President Moo Jae-in, came three days before the scheduled one-day meeting of Moon and North Korean leader Kim Jong-un at the Peace House on the southern side of Panmunjom.

Details of the rehearsal will be kept secret as it would reveal the schedule for the meeting of the two leaders, which has not been made public.

The official said the countries decided to do the rehearsal at the same time as the actual summit meeting because sunlight has to be taken into consideration for the broadcasting of the meeting.

Seoul will have a final rehearsal on Thursday with all of its summit attendants participating.

In what may have been the North’s recognition of heavy worldwide media attention on what will be the first inter-Korean summit in 11 years, the North on Monday agreed to allow South Korean journalists to come north of the border and broadcast Kim’s crossing to the southern side of Panmunjom, enabling them to capture Kim the moment he starts walking toward the border line.

The Blue House disclosed the menu of the dinner to be served at the summit. Korean media have paid particularly high interest in food selections that convey special meaning. Aware of the interest, the presidential office selected food specialties from the hometowns of former Presidents Kim Dae-jung and Roh Moo-hyun to be served. Former President Kim was the architect of the Sunshine Policy of engagement of North Korea, which was inherited by his successor Roh.

By choosing food specialties from the hometowns of the two late presidents, Moon symbolizes that he is inheriting the engagement policy formulated and carried out by his two liberal predecessors. A specialty from Moon’s hometown will also be included.

One notable selection is rosti, a Swiss potato dish, a tribute to Kim Jong-un’s years studying in the European country with his younger sister Kim Yo-jong.

The Blue House made clear the choice was for North Korean leader Kim.

The Blue House kept mum on whether Ri Sol-ju, the wife of Kim, or Kim Yo-jong will accompany Kim Jong-un on Friday. If North Korea’s first lady comes, it will be her second time in South Korea. She visited the South in 2003 as a member of a North Korean cheerleading squad for the Daegu Summer Universiade.

On a direct hotline installed last week between the offices of Moon and Kim, a Blue House official said they might use the hotline after the summit. The Blue House previously indicated the two would talk to each other on the phone before the Friday meeting.

Moon had a phone conversation with Prime Minister Shinzo Abe of Japan Tuesday afternoon that lasted 40 minutes. Abe asked Moon to address the issue of the abduction of Japanese by North Korea who are still held in the North during the latter’s meeting with Kim Friday.

Moon replied he would convey Abe’s message to Kim at the meeting. “I will tell Kim that solving the issue of the Japanese abductees will help establish peace in northeast Asia,” Moon was quoted as saying by the Blue House.