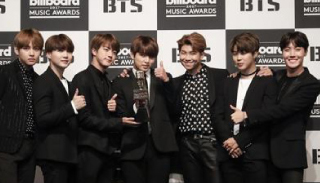 Boy band BTS will perform at the Billboard Music Awards (BBMAs) next month as the first K-pop artist to do so.

Announcing the news on the band’s official Twitter account Tuesday night, Big Hit Entertainment said the seven-member K-pop sensation will return to the BBMAs as a performer and debut its new single.

“Look out for our second appearance or - say what? - First performance at the BBMAs!” the group wrote. It also thanked its fans, known as ARMY, for making the performance possible with their enormous support.

The group is nominated for the Top Social Artist award for the second consecutive year. Last year, it won the award, beating such American top artists as Justin Bieber and Ariana Grande.

Two days prior to the scheduled performance, the group will drop its third album, “Love Yourself: Tear.”

The awards show, set to take place at the MGM Grand in Las Vegas, will air live on NBC on May 20. The show features other performers, including Dua Lipa, Camila Cabello and Shawn Mendes.