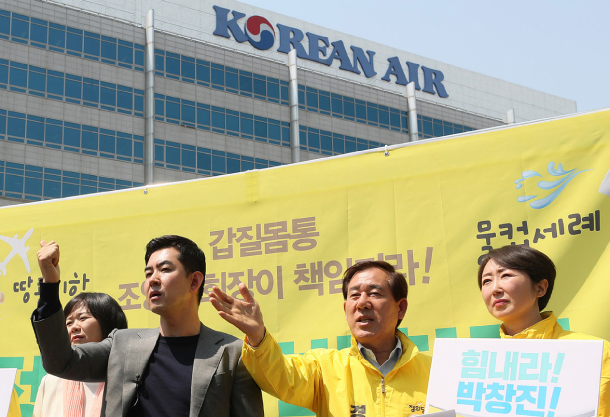 Park Chang-jin, the chief flight attendant that was the victim of the infamous “nut rage” incident in 2014, second from left, participates in a protest against the Cho family in front of the Korean Air headquarters in Gangseo District, western Seoul. [YONHAP]

Minority shareholders of Korean Air are coming together in an attempt to legally force the Cho family out of the airline’s management.

As allegations against the owner family snowball, local law firm J&Partners started gathering minority shareholders of the airline willing to take collective action against the Chos from Tuesday.

According to the law firm, the recent scandals involving the children and wife of Hanjin Group Chairman Cho Yang-ho have greatly deteriorated the value of Korea’s largest airline, and the damage directly impacts small shareholders.

“It may not be an easy process, but considering the public outrage and illicit activities of the current management, we can even file dismissal requests to the court, or shareholder derivative suits,” Park Hong-jo of J&Partners told the Korea JoongAng Daily Wednesday. “A number of minority shareholders have already talked to us about their losses.”

Park was originally considering opening up a shareholders’ meeting and passing a bill to change the board directors, but that plan could fall through if the law firm cannot gather enough voting rights.

Derivative suits, another option Park is considering, permit a shareholder to bring a lawsuit on behalf of the corporation against parties allegedly causing harm to it. Executive officers or board directors are not immune from this type of lawsuit.

The law firm did not disclose how many minority shareholders have agreed to take part in the case, but just the suggestion of a lawsuit is likely to seriously shake the Chos’ control over the airline, especially as thousands of Koreans have already filed petitions on the Blue House website demanding the family leave the airline.

Some investors are already petitioning the National Pension Service, the second-largest shareholder of Korean Air, to take on a bigger role in removing the Cho family.

According to the Financial Supervisory Service, the largest shareholder of Korean Air is Hanjin’s holding company Hanjin Kal, which owns 29.62 percent, followed by the NPS with 11.67 percent. Cho Yang-ho owns a 0.01 percent stake in the airline.

The NPS is yet to make an official statement, but its stance is likely to be that it is difficult for an institutional investor that holds shares purely for investment purposes to meddle in management issues.

Still, the situation could change if the plethora of investigations ultimately force the Cho family to step down.

In addition to ongoing investigations by the Fair Trade Commission, Korea Customs Service and police into Hanjin’s troubled Cho clan, the customs service announced Wednesday that it is looking into accusations that Incheon Main Customs and Korean Air illegally exchanged favors.

The accusations emerged in a KakaoTalk chat room where Korean Air employees discuss power abuse by the Cho family. Employees brought up evidence of officials at the customs office asking Korean Air employees to assign them favorable seats on flights. The requests were made via email.

According to a source at the airline, there have been a number of cases when high-level officials at the customs office requested the airline upgrade their seats. The customs service is now looking into its own operations to see if the reports are true.

The internal audit at the customs service is the fifth separate investigation into the Cho family - the police are currently looking into two incidents, one involving youngest daughter Cho Hyun-min assaulting advertising executives and the other involving mother Lee Myung-hee abusing workers.