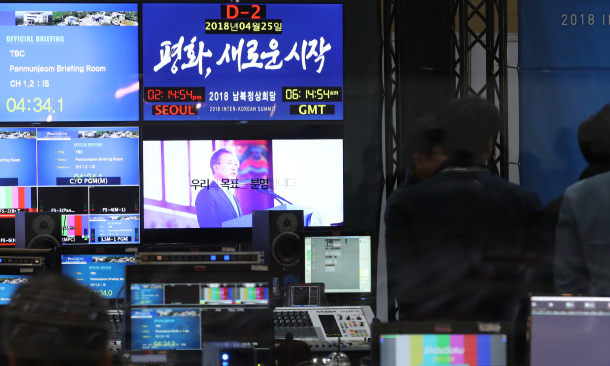 South and North Korea held a joint rehearsal for the inter-Korean summit on Wednesday, running through the movements of the two leaders before they meet for the first time at the border village of Panmunjom tomorrow.

The North Korean delegation led by Kim Chang-son, an official from the North’s powerful State Affairs Commission, crossed the military demarcation line at Panmunjom at 10 a.m. to join the rehearsal conducted at the Peace House, a South Korea-controlled building on the border.

Officials from both sides checked various aspects of the facility, including the placement of spotlights and cameras that will capture South Korean President Moon Jae-in and North Korean leader Kim Jong-un.

The Blue House said the rehearsal ended at 2:20 p.m. but did not reveal when it began in order to avoid revealing the time Kim will cross the border to meet Moon. The border crossing will make Kim the first North Korean leader to set foot on South Korean territory.

The rehearsal proceeded smoothly without a hitch, the Blue House said, with officials exchanging opinions on detailed aspects of the meeting from both sides. South Korea will have its final rehearsal today.

In a sign of the high stakes involved, President Moon cleared his schedule on Wednesday to focus on the summit. Throughout this week, Moon’s office has not scheduled any presidential activities outside the Blue House.

Aside from the president, South Korea will be represented by six other people at the summit: Im Jong-seok, Moon’s chief of staff; Kang Kyung-wha, minister of foreign affairs; Song Young-moo, minister of defense; Cho Myoung-gyon, minister of unification, who handles relations with North Korea; Chung Eui-yong, head of the Blue House’s National Security Office; and Suh Hoon, director of the National Intelligence Service.

North Korea has yet to announce its delegation. Of particular interest is whether Kim Yo-jong, the sister of Kim Jong-un, will accompany her brother tomorrow.

Among those expected to accompany Kim Jong-un include Kim Yong-chol, vice chairman of the Workers’ Party’s Central Committee and director of the United Front Department, and Ri Yong-ho, the North’s minister of foreign affairs.

The Blue House also announced details of renovations it made to the Peace House for the meeting. A round table has replaced a rectangular one with the hope that the two leaders can have “an honest, open-minded discussion.”

A painting of Mount Kumgang in North Korea will hang on one wall of the meeting room.

“The painting carries a sense of hope for a successful summit since Mount Kumgang represents cooperation and reconciliation between the two Koreas,” the Blue House said in a statement.

Since 1998, South Korean tourists had been allowed to visit Mount Kumgang in one of the few economic cooperation projects between the two Koreas, but the program was closed in 2008 after a North Korean soldier shot and killed a South Korean tourist in the resort.