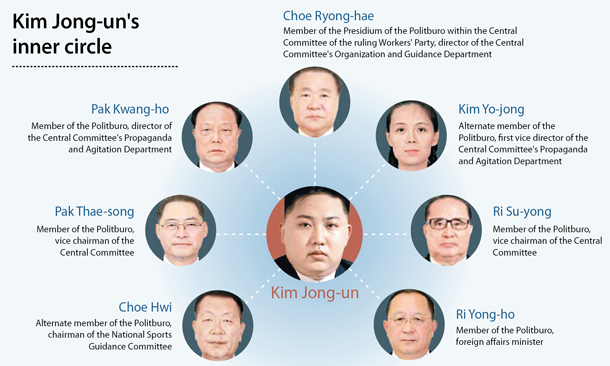 The first face-to-face interaction between South Korean President Moon Jae-in and North Korean leader Kim Jong-un is only one day away. In a four-part series, the JoongAng Ilbo analyzes Kim’s major change of course this year, the struggles of the country’s economy that could have triggered that change and Kim’s powerful inner circle.


When Kim Jong-un arrived at the Kumsusan Palace of the Sun on April 15 to pay tribute to his grandfather Kim Il Sung on the occasion of the state founder’s 106th birth anniversary, military officials were noticeably absent from his entourage. North Korean media made no mention of any top brass when it reported on the 34-year-old’s visit to the Pyongyang mausoleum the next day, a departure from the past when Kim Jong-un was usually described as being accompanied by Workers’ Party bigwigs, members of his cabinet - and military men.

That scene was repeated on Feb. 16, when Kim Jong-un arrived at the same mausoleum to pay respects to his late father Kim Jong-il on the former leader’s 76th birth anniversary.

In reclusive North Korea, much can be gleaned from who accompanies the leader, with those standing closest to the Kim clan assumed to have the most influence.

When Kim Jong-un visited China in late March on his first known foreign trip, military officials were left at home. When his father made his first trip to Beijing in 2000, he was flanked by Jo Myong-rok, director of the Korean People’s Army’s General Political Bureau - who was widely considered Kim Jong-il’s right-hand man - and Kim Yong-chun, director of the Army’s General Staff.

Kim Jong-gak, the newly appointed director of the Army’s General Politburo, was recently named a member of the State Affairs Commission - but only a member. His predecessor Hwang Pyong-so served as the commission’s vice chairman.

Kim Jong-un’s focus on the Workers’ Party resembles his grandfather, Kim Il Sung, while Kim Jong-il emphasized the military. Pak Yong-sik is the sixth person to be tapped as North Korea’s minister of armed forces under the Kim Jong-un regime, after his five predecessors were either fired or executed for disloyalty. Kim Il Sung had five armed forces ministers during his 46-year rule and Kim Jong-il had three in his 17-year rule, which ended with his death six years ago.

“By constantly reshuffling military personnel,” says Chon Hyun-joon, a visiting professor at the Department of Military Security in Woosuk University, “Kim Jong-un is trying to make them feel jittery, and through that pressure, induce loyalty.”

Though with less velocity, Kim hasn’t shied from sacking his closest aides in the Workers’ Party and cabinet, either. In December 2013, when the leader visited Samjiyon County in Ryanggang Province, in the northern part of North Korea that borders China, he was accompanied by eight people. South Korean intelligence authorities believe at least four have been punished one way or another.

The visit provided a significant look at Kim’s inner circle because Samjiyon is home to Mount Paektu, a symbolic mountain in North Korean society where Kim Jong-un often goes ahead of making crucial decisions. Two weeks after the visit in December 2013, Jang Song-thaek, Kim’s uncle and political mentor, was executed for “anti-party, counter-revolutionary acts in a bid to overthrow the leadership,” as described in the words of the North’s media.

Hwang Pyong-so, former director of the Army’s General Politburo, and his deputy director Kim Won-hong were in Kim’s entourage on the trip to Samjiyon. South Korean intelligence officials believe Hwang has been demoted, while Kim Won-hong had been purged, both for disloyalty to the leader.

The Samjiyon entourage also included Ma Won-chun, director of the State Affairs Commission’s Designing Department, and Han Kwang-sang, who at the time served in the Workers’ Party’s Finance Accounting Department. They both were forced to undergo ideological reeducation after failing to follow Kim Jong-un’s order to renovate Pyongyang Sunan International Airport as glamorously as possible.

They unwisely chose to work within the state budget. Ma managed to keep his job, but Han was fired.

Kim Jong-un’s personnel decisions, analysts say, also reflect the 34-year-old leader’s desire to sideline important figures from his father’s era, a way of strengthening his grip over the regime and deterring any possible traitors.

Of 32 officials who were appointed as alternative members or standing members of the Workers’ Party’s Politburo during a meeting in September 2010, before Kim Jong-un rose to power, only five remain today. All 12 members of Kim Jong-il’s National Defense Commission, predecessor of the State Affairs Commission, were replaced after the younger Kim took over.

“Among the 31 people who appeared in North Korean media the most towards the end of the Kim Jong-il leadership, 24 have been removed from their key posts,” says Kim Jin-moo, a professor at the Graduate School of International Studies in Sookmyung Women’s University.