State official says U.S. does not want to protract talks

State official says U.S. does not want to protract talks 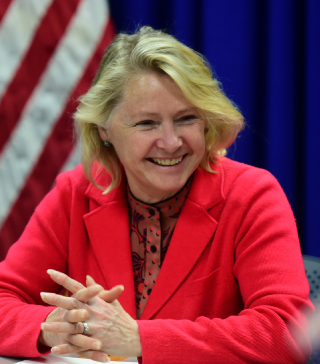 The United States has no interest in prolonging negotiations with North Korea on its nuclear arsenal, a top State Department official said in Seoul on Tuesday, underscoring the U.S. government’s position that sanctions on the regime will not be lifted until it demonstrates concrete steps toward denuclearization.

Speaking to Korean reporters at the U.S. Embassy’s annex in Yongsan District, central Seoul, Susan Thornton, the assistant secretary of state for East Asian and Pacific affairs, elaborated on the U.S. government’s outlook for an upcoming summit between the North and South Korean leaders and a first-ever meeting between a North Korean and American leader.

Thornton was in Seoul from Sunday to Tuesday to discuss the upcoming summits with South Korean officials and coordinate with them on talks about North Korea’s possible denuclearization.

During the news conference, Thornton described recent developments in North Korea as positive but stressed that Kim Jong-un and his government in Pyongyang had to take concrete actions to demonstrate their sincerity toward denuclearization.

Over the weekend, Kim announced his country would stop testing nuclear weapons and intercontinental ballistic missiles. It would also close a nuclear test site in the northern part of the country.

Thornton said Washington would “expect to see tangible movement on denuclearization before sanctions can be lifted.” This might include actions related to verification of a nuclear stockpile, inspections of facilities or dismantlement of weapons, though technical details will have to be settled through further discussions, she said.

When reporters pressed her on the definition of denuclearization, Thornton confirmed the White House’s commitment to complete, verifiable and irreversible dismantlement.

Thornton reiterated the Trump administration’s line that it would not “repeat the mistakes of the past,” saying it was “connected to his sense of urgency” to tackle the problem.

On the possibility of reviving the six-party talks, which have been stalled since 2009 after North Korea walked out, Thornton stressed the value of an international coalition pressuring the country to denuclearize but said the administration was not “wedded to any particular format.”

When reporters asked whether the United States was willing to offer security guarantees to North Korea in exchange for denuclearization, Thornton said discussions with the North will show what can be accommodated.

“There is no such thing as hostile policy by the U.S. towards the DPRK [North Korea],” she said. “The [U.S.-South Korea] alliance and exercises are defensive.”

In terms of accommodations, Thornton does not believe the withdrawal of U.S. troops from South Korea is “on the list of things we will consider.”

Thornton met with Kang Kyung-wha, South Korea’s minister of foreign affairs, on Monday and visited the Ministry of Unification, which handles relations with North Korea, on Tuesday.

After the news conference, she traveled to Tokyo, where she is expected to remain until tomorrow.