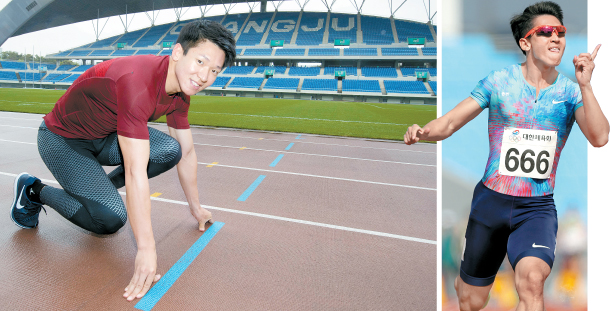 Kim Kuk-young, the fastest-ever Korean sprinter, is focused on making the podium at the upcoming 2018 Jakarta-Palembang Asian Games in August.

The 27-year-old rose to fame when he set the men’s 100-meter national record with 10.07 seconds last June at the Korea Open International Athletics Competition, and became the first Korean to enter the semifinals for the International Association of Athletics Federations (IAAF) World Championship in London last August.

“I don’t want to miss this chance,” said Kim. “Though some people doubt me, I want to challenge myself and finish the 100-meter race in the nine-second range [for the Asian Games].”

Kim sat down for an interview with the JoongAng Ilbo, an affiliate of the Korea JoongAng Daily, to talk about his training experiences and his plans for the Asian Games on Tuesday at the Gwangju World Cup Stadium.

To develop his endurance, Kim set a high bar and focused training on the 400 meters, rather than the 100 meters, throughout the winter.

The extra effort paid off as he built up the stamina to enter his first 400-meter race. He came in sixth on April 11 at a national track and field competition in Naju, South Jeolla, clocking a time of 49.51 seconds.

“It was a bit difficult,” Kim admitted. I focused on that distance throughout the winter to run better for the 100 meters. I entered the race to check my stamina.”

The sprinter finished the race without injuring himself and said he now knows his physical endurance.

“It’s not easy for a 100-meter sprinter to train for a 400-meter race,” said Park. “Like last year, his level of training for this year was also very high. But Kuk-young overcame it well. That’s why I have higher expectations for him now.”

The sprinter will start flying back and forth between Japan, Taiwan and Korea starting on Sunday to enter seven to eight different races before heading to Indonesia in August. His first race will be in Hiroshima, Japan, on Sunday. Kim plans to increase his endurance by also competing in 200-meter races.

“I also want to prioritize the 200 meters to a certain degree,” explained Kim. “I want to take all the skills I’ve learned from each category and apply it [to the 100 meters] for the best results.”

Kim is determined to compete overseas before the Asian Games begin to increase his competitiveness.

“I have to compete against highly-skilled athletes at the Asian Games,” explained Kim. “Competitions in Japan, especially, have many sprinters who have similar results to mine and run at the 10-second mark. I’m trying to learn not to get too nervous when I’m facing these athletes.”

“I’m expecting a new record for Korea at Japan’s Fuse Sprint meet at the beginning of June,” coach Park said.

The road to this point hasn’t been easy for Kim.

He failed to medal in both the 2010 Guangzhou Asian Games and the 2014 Incheon Asian Games, and some fans criticized him for it. But Kim’s past stumbles only increased his determination for his third Asian Games in Indonesia.

“I always want to run better,” said Kim. “I wish it was as easy as it sounds, but with my third Asian Games drawing closer, I’m beginning to take it more seriously.”

After setting his recent record time, Kim is now one step closer to medaling at the Asian Games.

“I gained a lot of confidence,” said Kim. “I always told myself that I wanted to run better, but in reality, I felt like I was hitting a wall. But with last year’s results, I think I can finally make it this time and find strength within me.”

With the new confidence boost, Kim’s goal is to run the 100 meters in the nine-second range and set a new record for Korea.

“Every time, people have said it’s impossible and difficult for a Korean to break a record,” said Kim.

Japan’s Yoshihide Kiryu has fastest time for an Asian sprinter for the 100-meter dash - 9.98 seconds.