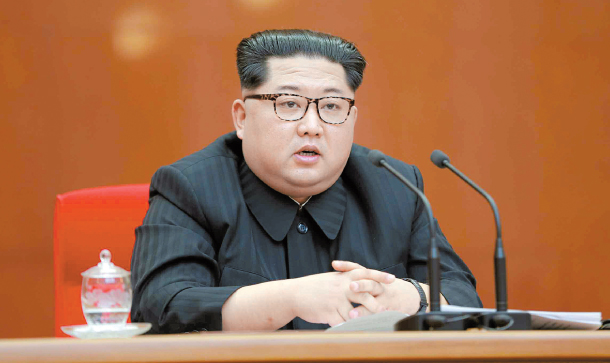 North Korean leader Kim Jong-un presides over a plenary meeting of the Central Committee of the Workers’ Party in Pyongyang on April 20. [RODONG SINMUN]

Who is Kim Jong-un?

Beyond the trickle of propaganda from Pyongyang, little is known about North Korea’s enigmatic leader, especially his youth. South Korean intelligence officials believe he was born in 1984 as the son of Kim Jong-il and Ko Yong-hui, a dancer from Japan.

Ko’s father, according to officials, lived on Jeju Island before moving to Osaka during Japan’s colonial rule over the peninsula in the early 20th century. In the 1960s, her family sailed to North Korea as part of a repatriation program.

It is unknown how Ko first came in contact with Kim Jong-il. The boat that took her to North Korea arrived in Wonsan, a coastal city in the country’s southeastern Kangwon Province. There are rumors that officials in Pyongyang who knew of her existence called her “the lady from Wonsan.”

Kim Jong-un’s pet project, the Masikryong Ski Resort, is near Wonsan, and he has a summer home there that he often visits with his siblings, leading pundits to believe that the current leader may feel a special connection to the area.

North Korea’s state-run media takes every opportunity to glorify its leaders, churning out old photos and videos from their youth. Pictures of Kim Jong-il from his childhood and short clips of his participation in military training while he was a student at Kim Il Sung University in Pyongyang still proliferate in the North’s media.

Not so much with Kim Jong-un.

“He spent his teenage years studying in Switzerland during the late 1990s, so there’s this kind of gap North Korea can’t fill to glorify him,” says Ahn Chan-il, president of the World Institute for North Korea Studies.

While Kim Jong-un was in Europe, North Korea was suffering from a massive famine believed to have taken millions of lives. The regime would have a difficult time saying its supreme leader had been studying in the West during that period, Ahn says.

Another reason why it might be hard to mention Kim’s youth in North Korean propaganda is because his maternal grandfather used to work in a Japanese military factory, which goes against his paternal grandfather’s history of fighting against the Japanese during its colonization of Korea in the early 20th century.

“He was a good guy,” Joao Micaelo, who claims to have known Kim Jong-un while attending a German school south of Bern, told The Daily Beast in January. Marco Imhof, another former classmate, said Kim was “funny” and hated to lose. “Winning was very important,” he said.

But Kurt Campbell, an American diplomat who served as the assistant secretary of state for East Asian and Pacific affairs, revealed a different character when he spoke to CNN in December 2013 after Kim executed Jang Song-thaek, his political mentor and uncle, for disloyalty.

Campbell said American authorities had interviewed people who knew Kim when he was studying in Switzerland and reached the conclusion that he was “dangerous, unpredictable, prone to violence and with delusions of grandeur.”

A year before Kim Jong-il died, he announced in September 2010 during a Workers’ Party meeting that his youngest son, Kim Jong-un, would succeed him as leader of North Korea.

The news came as a surprise for several South Korean analysts because they believed Kim Jong-il would tap his oldest son, Kim Jong-nam, in accordance with the conventional line of succession.

Kim Jong-nam later told Yoji Gomi, a Japanese journalist who authored the 2012 book “Kim Jong Nam: My Father, Kim Jong Il and Me,” that his father wasn’t fond of the heavy influence that the outside world had on him from his extensive experience studying in the West.

Kim Jong-il’s second son, Kim Jong-chol, was said to have been crossed off the list because of an “effeminate voice” caused by a hormonal condition.