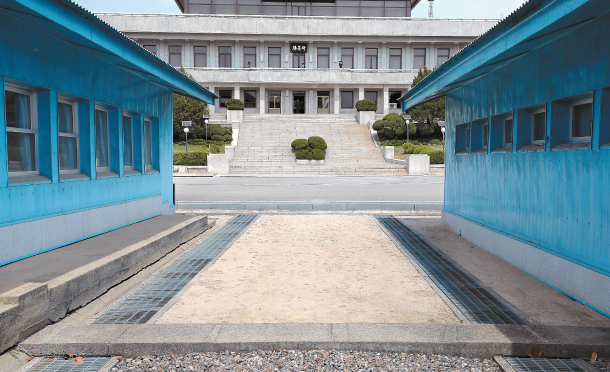 North Korean leader Kim Jong-un will make a historic border crossing through this passage into South Korea at 9:30 a.m. today in Panmunjom, where President Moon Jae-in will welcome him. [YONHAP]

North Korean leader Kim Jong-un will make a historic border crossing into South Korea at 9:30 a.m. today in Panmunjom, where President Moon Jae-in will welcome him to the third inter-Korean summit meeting - with the entire world watching.

The Blue House said Thursday that Kim will make cross the military demarcation line (MDL) that bisects the border village of Panmunjom between one-story blue buildings known as T2 and T3, which are used as meeting rooms by the Military Armistice Commission, making him the first North Korean leader to set foot in South Korean territory.

“President Moon will greet Chairman Kim at the MDL in front of the Military Armistice Commission meeting room,” Im Jong-seok, Moon’s chief of staff, told reporters at a media center at Kintex in Goyang, Gyeonggi.

Following the greeting, Kim will review an honor guard prepared by the South Korean military, against which his grandfather Kim Il Sung fought from 1950 to 1953 to put the entire Korean Peninsula under communist rule.

It was not clear until Thursday whether the North Korean leader would review an honor guard, considering the two Koreas are still technically at war since the 1950-53 Korean War ended in an armistice, not a peace treaty.

Im said the government decided to feature the honor guard ceremony since two former South Korean presidents - Kim Dae-jung and Roh Moo-hyun - both inspected honor guards composed of North Korea’s navy, air force and army during their visits to Pyongyang for the two previous summit meetings in 2000 and 2007 with the late Kim Jong-il, the father of Kim Jong-un.

“After reviewing the honor guard, the two leaders will greet the official delegates of both sides accompanying them, which will conclude the welcoming ceremony,” Im said.

Then the two will enter Peace House, a three-story building, and Kim will sign a guest book and have a brief chat with Moon in a reception room before going to a conference room on the second floor for the first round of summit talks, with denuclearization at the top of the agenda. The meeting is scheduled to kick off at 10:30 a.m. 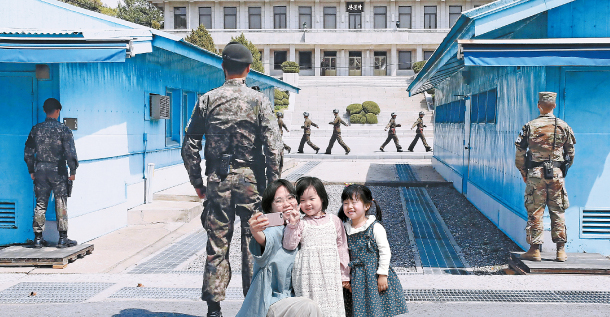 A mother and her daughters take a selfie in front of a life-size photo of Panmunjom on Thursday. The photo was set up at Seoul Plaza in front of Seoul City Hall. [LIM HYUN-DONG]

Following the first round of talks, the two leaders will have separate lunches. Kim will return to the northern side of the MDL with his delegates.

After lunch, in a highly symbolic move, the two leaders will plant a pine tree together on the MDL. Im said the tree would be planted beside a path near the border line where Chung Ju-yung, the founder of Hyundai Group, departed for the North with a long line of trucks carrying cattle on a visit to his hometown in North Korea in 1998 in a gesture of inter-Korean cooperation.

Im said the age of the tree dates to 1953, when the armistice was signed to stop the three-year-old conflict.

In more symbolism, the two leaders will water the tree they planted using water from the Han River in Seoul and Taedong River in Pyongyang as well as a mixture of soil from Mount Halla in Jeju and Mount Paektu in northernmost North Korea.

After the tree planting, the two will chat and stroll toward the footbridge, which Im said was opened by “the United Nations Command, when it was built over a marsh in the Panmunjom area to shorten the route taken by the Neutral Nations Supervisory Commission.”

Im said the bridge was widened for the summit.

After the short stroll, the two will resume talks at Peace House on a variety of issues that have concerned not only the two Koreas but the world, namely the North’s pursuit of nuclear and intercontinental ballistic missile technologies.

Once Moon and Kim wrap up their talks, the two will announce what they have agreed on. But the format of the announcement is yet to be determined given the complicated nature of the talks.

Chief of Staff Im said depending on the depth and extent of bilateral agreements, the announcement could be “made in front of Peace House in an official manner,” referring to a live press briefing. Or, he said, it could just be a statement signed by the two without a press briefing.

If Kim stands before a throng of cameras next to Moon in a live press conference, it will be the first time ever for a North Korean leader to do such a thing - possibly even taking questions from pool journalists.

“I think the summit would be considered successful if we could clearly put into words [the North’s] clear denuclearization intent and that it would represent the complete denuclearization of the Korean Peninsula in the next step,” said Im.

A dinner will start at 6:30 p.m. on the third floor of Peace House with all delegates from both sides participating. They will be served a 10-course meal.

After the dinner, a farewell ceremony will take place. The two leaders will watch a video that will be projected on the facade of Peace House before a final goodbye. The theme of the video is “A New Spring Enjoyed Together.”

Even a day before the summit, Im said it was still up in the air whether Ri Sol-ju, the wife of Kim Jong-un, would accompany her husband to the South. If she comes, it will be her second time in South Korea since a visit in 2003 as a member of a North Korean cheerleading squad for the Daegu Summer Universiade.

To the South Korean government, that was a good sign that a breakthrough could come on Friday.

“We understand that the North included core military officials because matters of denuclearization, establishing a permanent peace regime and easing of inter-Korean tensions will be discussed at the meeting,” said Im.

Also illustrating the high stakes involved in Friday’s meeting, Kim Yo-jong, the younger sister of Kim Jong-un who serves as the First Vice Department Director of the Central Committee of the Workers’ Party of Korea, will accompany her brother as an official delegate. The sister is expected to be sitting next to her brother at the meeting.