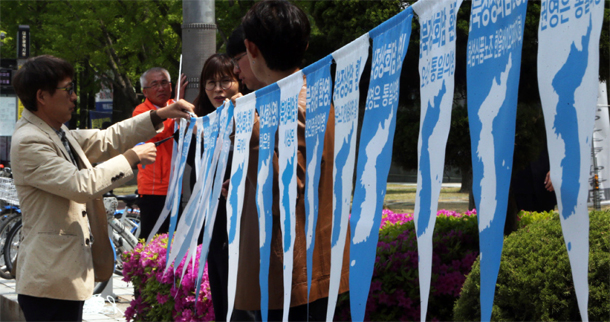 South Korean religious groups are holding various events in tandem with the inter-Korean summit today to wish for a successful meeting between North and South Korean leaders.

The northern Gyeonggi branch of the Presbyterian Church of Korea said it will hold an all-night prayer meeting of priests from 8 p.m. Thursday to 8 a.m. Friday, bringing together about 30 priests who work in the vicinity of the heavily armed border to a church in Paju, just south of the border.

A group of Christian politicians had a morning of fasting and prayer at the National Assembly on Thursday. Among the participants were Jay Kim, former member of the U.S. House of Representatives; Hwang Woo-yea, former deputy prime minister for social affairs; Rep. Park Joo-sun, co-leader of the minor opposition Bareunmirae Party; and Rep. Kim Jin-pyo of the ruling Democratic Party.

The National Council of Churches in Korea hosted a national prayer meeting last Thursday and has since been holding special prayer meetings for inter-Korean peace in its churches every day.

South Korea’s Buddhist community has also been holding services and bell-tolling ceremonies to wish for the summit’s success. Temples around the country have been holding Buddhist rituals every day since Saturday.

The Jogye Order, the country’s largest Buddhist sect, rang the bronze bell at its main Jogye Temple in central Seoul 33 times Thursday morning, with its leader, the Venerable Seoljeong, in attendance.

“Ahead of the historic summit talks, all the people are wishing for [the event’s success] with one mind,” Seoljeong said during the ceremony. “I hope the sound of this bell will spread to the entire world and that the summit will be accomplished smoothly so that the denuclearization of the Korean Peninsula can be achieved.”

Temples around the country will hold a simultaneous bell-tolling ceremony today, while 20,000 Buddhists will gather at Gwanghwamun Square in central Seoul to jointly recite the Diamond Sutra.