MONTGOMERY, Alabama - Tears and expressions of grief met the opening of the nation’s first memorial to the victims of lynching on Thursday in Alabama. 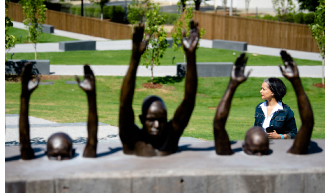 The Equal Justice Initiative’s National Memorial for Peace and Justice opened Thursday, commemorating 4,400 African-Americans who were slain in lynchings and other racial killings between 1877 and 1950. [AP/YONHAP]

Hundreds lined up in the rain to get a first look at the memorial and museum in Montgomery. The National Memorial for Peace and Justice commemorates 4,400 black people who were slain in lynchings and other racial killings between 1877 and 1950. Their names, where known, are engraved on 800 dark, rectangular steel columns, one for each U.S. county where lynchings occurred.

A related museum, called The Legacy Museum: From Enslavement to Mass Incarceration, is opening in Montgomery.

Many visitors shed tears and stared intently at the commemorative columns, many of which are suspended in the air from above.

Toni Battle drove from San Francisco to attend. “I’m a descendant of three lynching victims,’’ Battle said, her face wet with tears. “I wanted to come and honor them and also those in my family that couldn’t be here.’’

Ava DuVernay, the Oscar-nominated film director, told several thousand people at a conference marking the memorial launch “to be evangelists and say what you saw and what you experienced here. ... Every American who believes in justice and dignity must come here ... Don’t just leave feeling like, ‘That was amazing. I cried.’ ... Go out and tell what you saw.’’

As for her own reaction, DuVernay said: “This place has scratched a scab. It’s really open for me right now.’’

Angel Smith Dixon, who is biracial, came from Lawrenceville, Georgia, to see the memorial. “We’re publicly grieving this atrocity for the first time as a nation. ... You can’t grieve something you can’t see, something you don’t acknowledge. Part of the healing process, the first step is to acknowledge it.’’

The crowd included white and black visitors. Mary Ann Braubach, who is white, came from Los Angeles. “As an American, I feel this is a past we have to confront,’’ she said as she choked back tears.

DuVernay, Jackson, playwright Anna Deavere Smith, singing group Sweet Honey in the Rock, Rep. John Lewis and other activists and artists spoke and performed at an opening ceremony Thursday night that was, by turns, somber and celebratory.

Among those introduced and cheered with standing ovations were activists from the 1950s Montgomery bus boycott, Freedom Rider Bernard Lafayette and one of the original Little Rock Nine, Elizabeth Eckford.

“There are forces in America today trying to take us back,’’ Lewis said. “We’re not going back. We’re going forward with this museum.’’

Singer Patti LaBelle ended the evening with a soulful rendition of “A Change is Gonna Come.’’