A conciliatory mood and the occasional joke

A conciliatory mood and the occasional joke 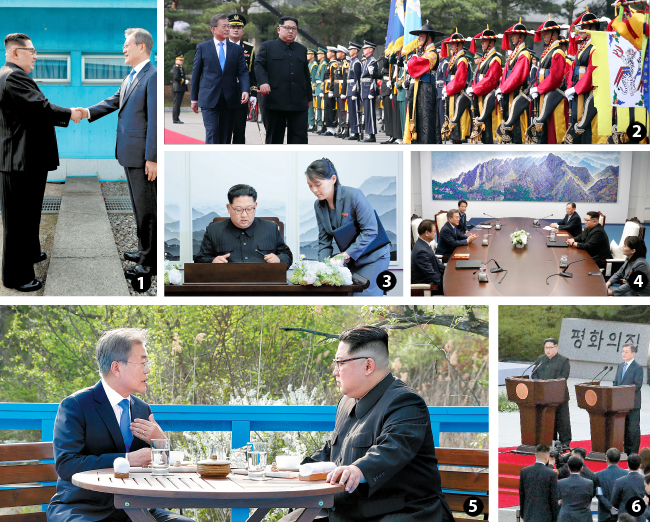 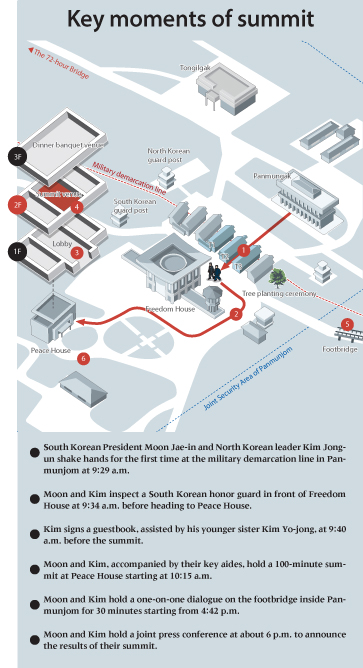 A historic summit between the two Koreas’ leaders began with a single step.

At 9:28 a.m., Kim emerged from Panmungak, a pavilion on the northern side of the military demarcation line that bisects the Korean Peninsula. He was accompanied by nine aides including Kim Yong-nam, the North’s nominal head of state; Kim Yong-chol, vice chairman of the Central Committee of the Workers’ Party; and his sister Kim Yo-jong, first vice director of the Central Committee’s Propaganda and Agitation Department.

North Korea’s young enigmatic leader wore a black Mao suit and maintained a serious expression when he stepped out of the pavilion, but as he approached Moon, dressed in a Western business suit and waiting on the southern side of the military demarcation line, he put on a jovial smile.

Moon kicked off the exchange of niceties. “It’s a pleasure to meet you,” he said, to which Kim replied, “Indeed, I’m so filled with excitement because of the summit at this historic site, and I was truly moved that you have come all this way to receive me at the military demarcation line at Panmunjom.” The South Korean president then praised Kim’s “bold and courageous decision” to attend the summit, calling it “a historic moment.”

At 9:29 a.m., Kim crossed the border through a passage between two blue buildings known as T2 and T3, which function as meeting rooms for the Military Armistice Commission, a United Nations commission that oversees the border. The two posed for photos.

Then, in a surprise move, Kim asked Moon to step over to the northern side.

Moon stopped for a second and eventually obliged. The two held hands and stepped over the military demarcation line together. They stood on the northern side for about 10 seconds, speaking to each other before crossing back over to the southern side, again smiling and holding hands.

At a briefing on Friday, Yoon Young-chan, President Moon’s senior secretary for public affairs, recounted the exchange that led to Kim’s invitation. “As they stood by the border, Moon said, ‘You came to the South, but when can I go over to the North?,’ to which Kim replied, ‘Why don’t we go over now?’ He took President Moon by the hand and they crossed over together, which was not planned in advance.”

The scene of the two leaders standing together in South Korean territory marked a dramatic turn from the geopolitical tension of last year, when many feared that vitriolic exchanges between Kim and U.S. President Donald Trump would lead to actual war.

At 9:34 a.m., Moon and Kim walked a red carpet set up on the eastern side of the Freedom House, a South Korean-controlled building in the border village of Panmunjom. They were escorted by an honor guard from the South Korean military, against which Kim’s grandfather, Kim Il Sung, fought between 1950 and 1953 to put the entire Korean Peninsula under communist rule. The war ended with an armistice, not a peace treaty, leaving the two Koreas still technically at war.

On the red carpet, Moon and Kim greeted each other’s delegation, and the groups posed for a photo together outside the Freedom House.

At around 9:40 a.m., Moon, Kim and their delegations stepped into the adjacent Peace House, where the summit was held. Kim signed his name in the guest book and left a message: “A new history begins now - an era of peace, the starting point of history.”

The talks began at 10:15 a.m. in a meeting room on the second floor of the Peace House. The participants were seated around an oval wooden table. Kim sat with two of his delegates: his sister Kim Yo-jong to his left and Kim Yong-chol to his right. Moon, sitting across from Kim, was flanked by Suh Hoon, director of the National Intelligence Service and Im Jong-seok, his chief of staff.

“It is not like the military demarcation line has been raised to a higher level so as to physically stop a person from crossing it, yet it has taken us 11 years to get this far to this historic moment,” Kim Jong-un said. “As I walked over here, which was only around 200 meters [650 feet] away, so many thoughts and feelings crossed my mind.

“Let’s talk candidly today and make good results - not results like the last time when we didn’t achieve them and went back to square one,” he added, calling the meeting an opportunity to look forward.

Moon replied, “The entire world’s eyes and ears are focused on Panmunjom. The people of South and North Korea, and Koreans living abroad, hold very high expectations, which is why I think we bear a heavy weight on our shoulders. The moment Chairman Kim Jong-un crossed the military demarcation line for the first time, Panmunjom became a symbol of peace, not a symbol of armistice. We have all the time today to talk. Let’s talk about everything we haven’t talked about over the last 10 years.”

The solemn mood was punctuated by the occasional joke. “The talk of the town seems to be what we’re having for dinner tonight,” Kim said in his opening remarks, drawing laughter in the room. “I brought some Pyongyang naengmyeon [cold noodles] for you to taste tonight. The noodles have come from afar.”

Then he paused and turned to his sister. “Oh, perhaps we shouldn’t use the word ‘far’ in this case, eh?” suggesting the two countries are growing close.

According to the Blue House, Kim even made a joke about missiles in the meet and greet before official talks.

In a briefing with the main press pool, Yoon Young-chan, Moon’s senior secretary for public affairs, relayed the account: “I heard, Mr. President, that you have not been able to sleep much lately because of National Security Council meetings set up because of us,” Kim reportedly told Moon. “I’ll see to it that you don’t lose your sleep.”

The first round of talks ended at 11:55 a.m. and lasted 100 minutes. “Both sides had a serious and frank discussion about denuclearization of the Korean Peninsula, establishing a permanent peace and ways to improve inter-Korean relations,” Yoon said.

For lunch, Kim and his delegation returned to the northern side of the military demarcation line.

At 4:30 p.m., the two sides reconvened at a path near the border, just east of where the leaders first met that morning, to plant a tree. The Blue House said the ceremony signified the two Koreas’ resolve for peace on the peninsula.

The tree was a pine, and the path was where Chung Ju-yung, the founder of Hyundai Group, departed for the North in 1998 with a long line of trucks carrying cattle on a goodwill visit to his hometown in North Korea. The Blue House said the relatively young pine tree dates to 1953, when the cease-fire agreement was signed.

Even the materials used to plant the trees were not without political symbolism. The water was brought from the Han River in Seoul and Taedong River in Pyongyang. The soil contained samples from Mount Halla in Jeju and Mount Paektu in the northernmost part of North Korea.

After planning the tree, Moon and Kim strolled toward a footbridge, which the Blue House said was completed by the United Nations Command in 1960. The bridge is located south of the military demarcation line and east of the UN conference rooms that straddle the border.

The South Korean government recently renovated the bridge and extended it to reach closer to the military demarcation line. The two leaders stopped at the bridge for about 30 minutes and sat down for a conversation unattended by press or aides.

In a live video feed of the encounter - streamed by the Blue House without audio - Moon and Kim appeared deep in conversation with Kim occasionally seen laughing.

The two leaders resumed talks accompanied by aides at 5:20 p.m. at the Peace House. Just before 6 p.m., they appeared before cameras with a joint declaration of results from the summit - the Panmunjom Declaration.

Moon and Kim signed the joint declaration, exchanged documents, shook hands and embraced each other.

In the evening, a celebratory dinner was held on the top floor of the Peace House attended by the two leaders, their wives and the delegations.

They toasted with champagne glasses of myeoncheon dugyeonju, a rice wine brewed with azalea flowers.