Security has never been so tight in truce village

Security has never been so tight in truce village 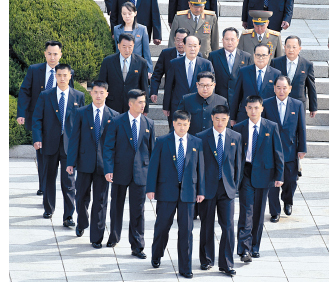 Surrounded by bodyguards, North Korean leader Kim Jong-un, center, leaves Panmungak, a building located on the northern side of the truce village of Panmunjom, to cross the military demarcation line to enter South Korea on Friday. Members of Kim’s security team were wearing suits and ties, not uniforms. [JOINT PRESS CORPS]

As North Korea’s leader stepped onto southern soil for the first time Friday, the South and North maintained a tight joint security posture around the military demarcation line (MDL).

The Joint Security Area (JSA) at the inter-Korean border is always heavily guarded by United Nations Command, South Korean and North Korean armed soldiers in uniform. It is a permanently tense area, where shots have been exchanged only recently when a North Korean defector dashed into the South last November.

But as the summit between the South’s President Moon Jae-in and North Korean leader Kim Jong-un kicked off, soldiers in uniform were nowhere to be seen. In their place, bodyguards in black suits shadowed the leaders inconspicuously.

The Blue House said Thursday that the southern side of the JSA had been designated a special security zone to be jointly guarded by both South and North Korea. The presidential security services led security for President Moon.

The seamless and heavy security for North Korean leader Kim was especially noticeable.

As Kim made his first appearance exiting Panmungak, a building on the northern side of the truce village of Panmunjom, he was also surrounded by a dozen bodyguards in black suits and blue-and-white striped ties who shadowed Kim throughout the summit schedule.

Kim’s escort command always stays close to the North Korean leader whenever he makes public appearances, although they are usually seen in military uniforms and with arms.

Over an hour ahead of Kim’s arrival, several North Korean guards entered Peace House, the venue for the summit on the southern side of Panmunjom, and sprayed the chair, on which Kim would sit on to sign a guest book in the first floor lobby, to sterilize it. They wiped down the chair with a white cloth, from the backboard to its legs, and sterilized the guest book as well. They checked the area for wiretapping devices and explosives.

The South Korean side had prepared the guest book and a pen for Kim to use, the North Korean leader used a Montblanc fountain pen carried by his younger sister, Kim Yo-jong, a member of his entourage, to sign the log.

The guards also sprayed the conference room ahead of the talks.

After the first session of talks with Moon ended, Kim headed back to the northern side of Panmunjom from the Peace House. The two leaders were to have separate luncheons before resuming talks in the afternoon.

A little before noon, the North Korean leader’s black Mercedes-Benz S600 Pullman Guard armored luxury limousine - without a license plate - was parked outside the Peace House to carry Kim back to the northern side of the MDL.

Kim was escorted to the car by the South’s Unification Minister Cho Myoung-gyon. A dozen North Korean guards in black suits surrounded the limousine and jogged alongside as the vehicle passed to the right side of T3, a Military Armistice Commission Conference Room, on the border, passing through the grass to the northern side.

The limousine was believed to be the same vehicle that was transported to China for Kim Jong-un’s first summit with Chinese President Xi Jin-ping in Beijing last month.

The guards also ran briskly alongside the limousine as Kim Jong-un traveled to a tree-planting with Moon Jae-in later that afternoon, but melted away when the two leaders took a one-on-one stroll.

Moon also rode a Mercedes-Benz limousine when he headed from the Blue House to Panmunjom for the summit earlier in the day, an hour’s drive, with a motorcade and police escorts.

There are generally three layers of defense for the South Korean president, with the Blue House security service in the first tier, military and police special forces in the second and a police-led system in the final tier.

Ahead of the inter-Korean summit, the two sides conducted three rounds of working-level talks to discuss protocol, security and press coverage.

The North’s delegates also included Kim Chol-gyu, who heads the North Korean Army’s Unit 963, which oversees over 100,000 elite soldiers. Unit 963 was reported to have inspected Kim Jong-un’s route ahead of time and was in charge of perimeter security. The delegates also included Sin Won-chol, another military official that heads Unit 974, which is 3,000-men strong and guards Kim.