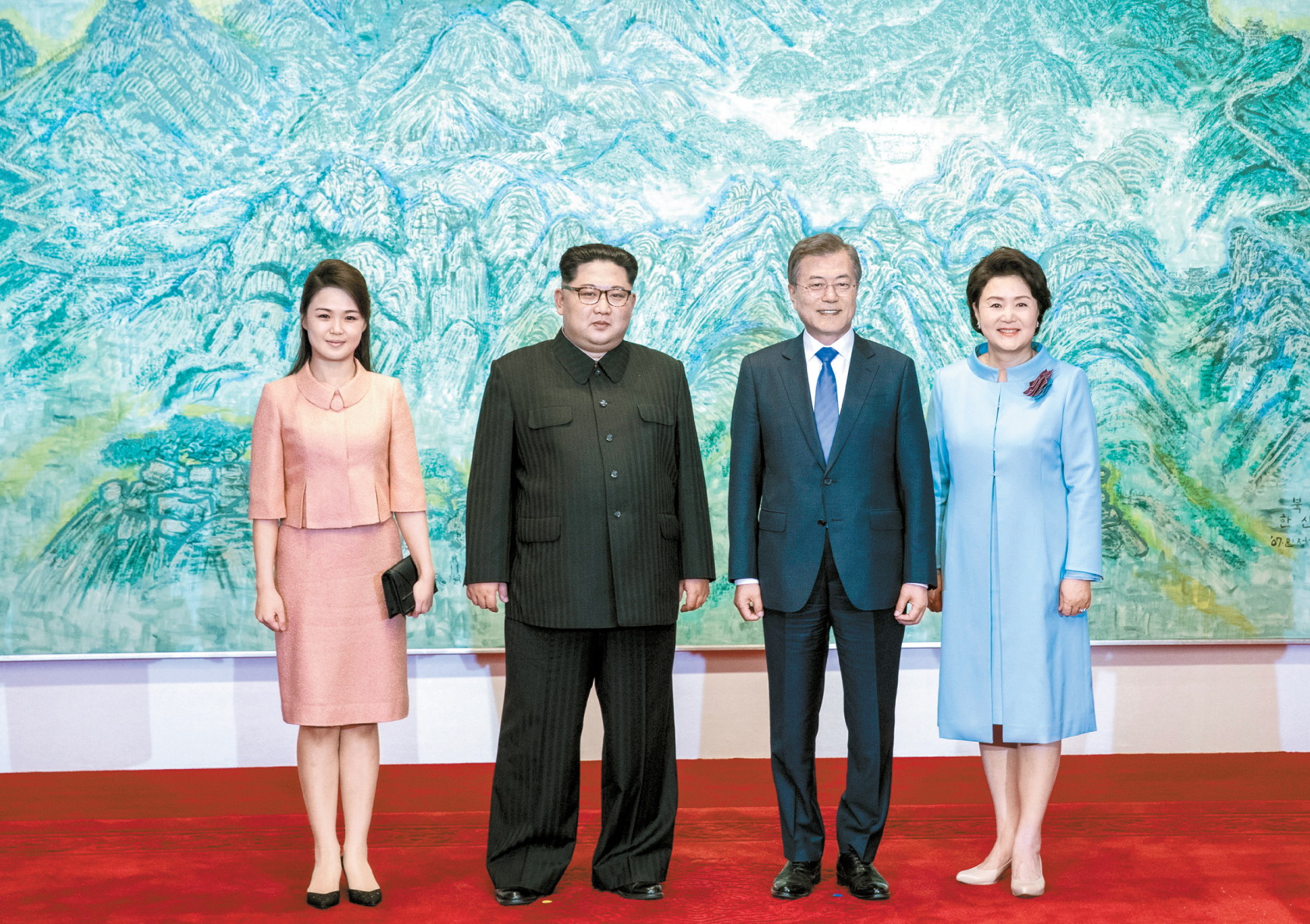 From left, Ri Sol-ju, the wife of Kim Jong-un; Kim; Moon Jae-in; and Kim Jung-sook, Moon’s wife, pose before a banquet in the Peace House on Friday. [JOINT PRESS CORPS]

Up until the final hours of the summit, even as Kim Jong-un was meeting with South Korean President Moon Jae-in, it was unclear whether Ri would accompany her husband to a dinner banquet after the summit.

After weeks of saying her visit was “undecided,” South Korea’s presidential office confirmed on Friday afternoon that Ri would attend the banquet. Unlike Kim Jong-un, who was visiting South Korea for the first time, Ri has crossed the border once before. In 2003, she attended the Summer Universiade in Daegu as a member of North Korea’s cheerleading squad.

South Korean analysts had suspected she would accompany Kim Jong-un this time like in late March when he traveled to Beijing to meet Chinese President Xi Jinping, a diplomatic gambit to convey North Korea as a normal state.

Ri’s appearances in North Korean media have become more frequent. Unlike in the past, when her name was preceded by Kim Jong-un’s “wife” or no title at all, the North has been referring her as “first lady” since Feb. 8, when she joined the leader to observe a military parade celebrating the 70th anniversary of the North Korean army’s founding.

Ri crossed the military demarcation line, which bisects the Korean Peninsula, in a black sedan at around 6:15 p.m. and arrived at the Peace House, a South Korean-controlled building where the summit was held earlier in the day, three minutes later.

Dressed in an apricot jacket, skirt and black heels and carrying a clutch, Ri was greeted by South Korea’s first lady, Kim Jung-sook, who was wearing a sky blue coat dress, at the entrance. Both walked inside the building lobby where Moon shook her hand.

The South Korean president, the first lady, Kim Jong-un and Ri briefly exchanged a few words at the Peace House before joining the banquet hosted by Moon. It was unclear as of press time Friday what they talked about, but the Blue House mentioned before the summit that officials from both Koreas had broached the topic of South Korea’s aid to North Korean children in the form of medicine or school supplies.

By contrast, during the previous two summits in 2000 and 2007, then-North Korean leader Kim Jong-il was only accompanied by Kim Yang-gon, secretary of the ruling Workers’ Party in charge of South Korean relations, who died in a car accident in 2015.

When Moon and Kim Jong-un kicked off their meeting at 10:15 a.m. at the Peace House, the North Korean leader was flanked by his younger sister Kim Yo-jong to his left and Kim Yong-chol to his right, indicating their strong influence in Pyongyang.

Kim Yo-jong, who visited South Korea last February as part of a North Korean delegation for the PyeongChang Winter Olympics opening ceremony, serves as first vice director of the Propaganda and Agitation Department within the Central Committee of the Workers’ Party.

Kim Yong-chol, who visited the South as part of the North Korean delegation for the closing ceremony, serves as vice chairman of the Central Committee and director of the committee’s United Front Department.

Moon was accompanied by his chief of staff, Im Jong-seok, to his left and Suh Hoon, director of the National Intelligence Service, South Korea’s spy agency, to his right.

Kim Yo-jong carried a strong presence throughout the summit, shadowing her older brother around the border village of Panmunjom as a close aide. The younger sister, who arrived with a thick black briefcase and a purse, personally took a flower bouquet that Kim Jong-un received from a South Korean child soon after crossing the military demarcation line.

She also had a fountain pen at hand when her older brother sat down to write his name and a message on a guest book shortly upon his arrival at the Peace House and placed files in front of him as he sat down at the summit table.

During the meeting, she took notes as he spoke.