Jang Ha-na nabs her second title of the season

Jang Ha-na nabs her second title of the season 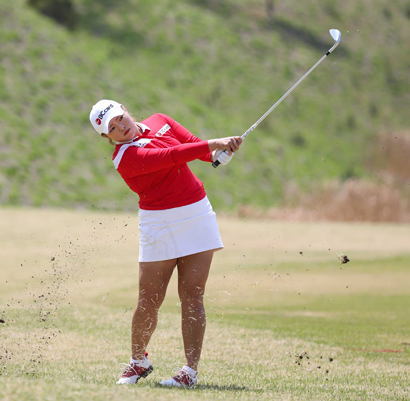 Jang Ha-na watches her shot during the final round of the KLPGA Championship at Lakewood Country Club in Gyeonggi on Sunday. [KLPGA]

Jang Ha-na became the KLPGA Tour’s first multi-winner of the season after topping the KLPGA Championship at Lakewood Country Club in Gyeonggi on Sunday. 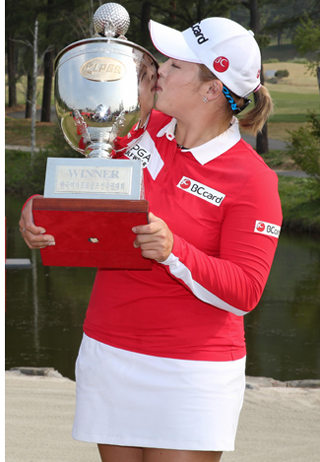 Up until the sixth hole, Jang allowed Ha Min-song to share the lead, but a bogey by Ha on the par-4 eighth brought Jang back up to sole lead. On the par-5 11th, Jang extended her lead by three shots after making a 3-meter (9.8-foot) birdie putt.

Holding a four-shot lead on the par-4 14th, Jang made a bogey to bring her back down to a three-shot lead, but since she finished her round with pars, Jang cruised her way to her 10th KLPGA Tour victory.

“Last season, I started [the final round] with a lot more lead but finished runner-up,” Jang said. “I was very nervous, but my caddie told me not to worry about winning and just play whichever way I wanted.”

Choi, a rookie on the KLPGA Tour, made a last-minute attempt to overtake Jang, finishing her round with three straight birdies, but in the end, she came up two shots short.

Along with a trophy for Jang was prize money worth 200 million won ($187,550) - and a secure lead in the points standing for KLPGA Player of the Year and season prize money. The win was a redemption of sorts for Jang - in the final round of last year’s KLPGA Championship, she started in the lead but failed to win.

“I wanted to win all the titles,” Jang said, “but once I start thinking about titles, I lost my play. Rather than the titles, my goal is to be a consistent player.”

Jang earned her LPGA Tour card through qualifying school in 2014, but it wasn’t until 2016 when she made herself known in the world of golf. That year, she won three tournaments, the most in a season among Korean players, and she continued her success into 2017, winning the ISPA Handa Australian Women’s Open in February.

Despite a successful career on the LPGA Tour, Jang made a surprise announcement in May 2017 that she would be dropping out of the tour mid-season and returning to Korea to spend more time with family and friends. At the time, she was ranked 10th in the world.

Jang joined the KLPGA for the second half of the season and had multiple runner-up finishes but no wins. This season, she is off to an earlier start than others - this is already her second victory. Jang won her first tournament of the season in March, at the Korea Investment & Securities Championship.

“Until last season, I had a lot of pressure that I needed to win because I returned [to the KLPGA],” Jang said. “But after my first win of the season, I felt alive, and after changing my coach, my swing feels a lot more stable.”

And it certainly shows in the numbers - Jang leads the KLPGA Tour in greens in regulation.

Ha, who briefly tied the lead with Jang, finished tied for seventh, shooting three over par in the final round to finish the tournament at eight under par.

Lee Jeong-eun, who won four tournaments last season and was KLPGA Player of the Year, finished tied for 11th at seven under par.

The KLPGA Tour will continue at the Kyochon Honey Ladies Open at Elysian Gangchon Resort in Chuncheon, Gangwon, on Friday.