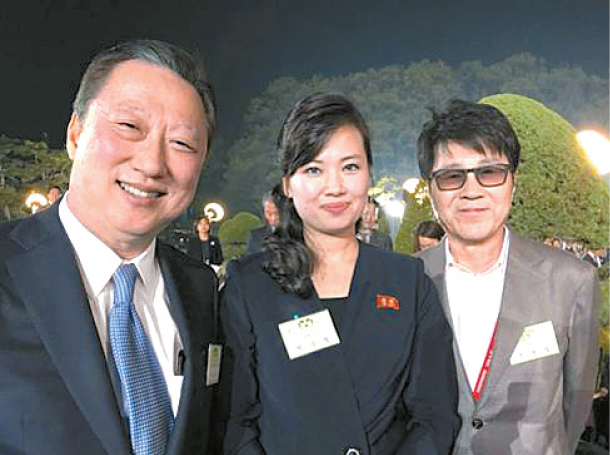 The only South Korean businessman to attend the banquet after the historic summit between South Korean President Moon Jae-in and North Korean leader Kim Jong-un on Friday expressed high hopes for economic cooperation between the two Koreas.

“It felt as though the biggest stepping stone has been placed,” wrote Park Yong-maan, chairman of the Korea Chamber of Commerce and Industry, on his Facebook account after the meeting between Moon and Kim on Friday.

“It makes one wonder why both sides have gone through such difficult times for so long,” he continued. “There’s a lot to say if we nitpick about the past. But at this point, we should look to the future.”

The KCCI chairman stressed that all sides should put every effort into realizing prosperity for both countries and their peoples through economic cooperation and exchanges.

“My heart is already becoming busy at the thought of getting prepared for proper economic cooperation through research and discussions until the time comes,” Park wrote.

There is already speculation that Park could be leading the private sector in economic cooperation with North Korea.

In fact, it was reported that Park was one of three South Koreans that Moon talked up during Friday’s dinner event.

The other two were Blue House policy chief Jang Ha-sung, who is expected to the lead overall policies on inter-Korean economic cooperation, and South Korean Minister of Land, Infrastructure and Transport Kim Hyun-mee, who leads the government department that will likely work with North Korea on major economic cooperation projects including infrastructure upgrades and industrial complexes.

The Korea Chamber of Commerce and Industry made numerous contacts with North Korea’s business organization, the Chosun Conference of Commerce, under the liberal Kim Dae-jung and Roh Moo-hyun administrations, which were the only other two governments in which South Korean Presidents met personally with North Korean leader Kim Jong-il, Kim Jong-un’s father.

Park also commented on the North Korean leader, saying he liked the way he came off in the media. “He wasn’t stiff or high-handed,” Park said. “He was socializing with ease.”

On the North Korean cold noodle dish, Okryugwan’s naengmyeon, that was served at the banquet, Park said the broth was top notch, but the noodles themselves were a bit tough.