After the historic inter-Korean summit concluded on a high note Friday, hopes are growing that North Korea may soon re-open its doors to South Korea, a move that will be welcomed by South Korean businesses.

“If conditions reach a mature level, [South Korea’s] business community will take the lead to pioneer a new era of economic development between South and North Korea,” said the Korea Chamber of Commerce and Industry last Friday, wishing for a successful summit between the two Koreas.

Despite not being a main point on the agenda between South Korean President Moon Jae-in and North Korean leader Kim Jong-un during the summit, inter-Korean economic exchange and cooperation is still a hot topic for many South Korean companies.

Over 80 percent of the companies in South Korea said they were hopeful that economic relations between the two nations would improve, while about half displayed willingness to invest in North Korea, according to a survey by the Federation of Korean Industries (FKI), South Korea’s major business lobbying group.

Companies interested in working with the North cited reasons such as infrastructure development opportunities in the North as well as resources and cheap labor.

“Preparations are under way for many companies who are hoping that there will be projects in the North they can get their hands on,” said Chung Bong-ho, head of the international cooperation team at the FKI.

North Korea is an attractive destination for South Korean companies, allowing businesses to outsource manufacturing in a much more efficient and cost-saving manner.

Estimates from the Bank of Korea suggest that North Korea’s gross national income (GNI) per capita stood at around 1.46 million won ($1,362) in 2016. In the same year, South Korea’s GNI per capita was 32.12 million won, about 22 times higher.

“Things like rising wages in the South make business conditions more difficult, especially for small and mid-sized enterprises (SMEs) and North Korea could be the place to go,” said Park Jin, professor of development economics at the Korea Development Institute (KDI).

Companies that owned factories in the Kaesong Industrial Complex before it was shut down in 2016 often said in the past that the low-cost, hard-working laborers from the North made the complex a favorable place to source production. In early 2015, South Korean firms in the complex paid about $140 on average as monthly salaries to their North Korean workers, according to data from the Ministry of Unification.

The location and nearly non-existent language barrier are other attractive factors of doing business in the North.

The joint industrial complex in Kaesong, for instance, is only about 60 kilometers (37 miles) away from Seoul, a two-hour drive taking into account security and road conditions north of the border. This is a considerably cheaper journey for South Korean manufacturers in comparison to plants outside of the country such as in Southeast Asia.

“Nowhere in the world can offer a labor force in such close proximity that speaks the same language at such a reasonable cost,” Park added.

According to data from the Unification Ministry, the total trade volume between the two countries stood at around $697 million in 2004. The trade volume in 2005 jumped to $1 billion, reaching as high as $2.4 billion by 2015, importing $1.2 billion worth of goods and exporting around the same amount.

It isn’t just SMEs that have their eyes on the North, as seen by the survey from the FKI.

“South Korean companies have an enormous amount of liquid assets and they have no place to invest in Korea, which is why they either do nothing with their money or invest overseas,” said Kim Young-ick, a professor of economics at Sogang University.

Kim estimated that South Korean conglomerates together have about 575 trillion won in liquid asset. He thinks that if the North becomes accessible, it would be an ideal destination for South Korean firms to invest their cash in.

“In the past when the doors opened, conglomerates scrambled to invest and do business in the North,” said Chung of the FKI. 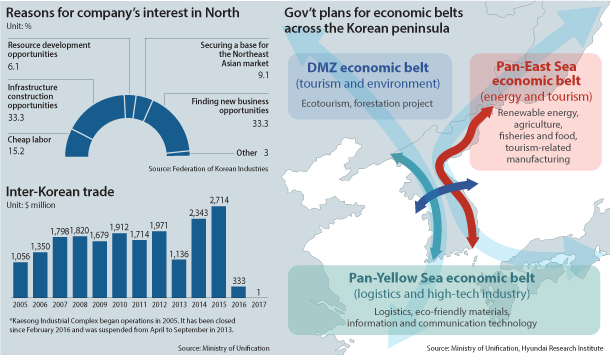 As Chung said, North Korea has a huge number of opportunities for land development projects, making it a potential gold mine for companies in sectors such as construction.

During the summit, North Korean leader Kim said he’s “worried” that Moon may feel uncomfortable because of the poor transport conditions, saying that the North will be “ready” when Moon visits. Moon said that if South Korea’s railroads are linked to the North, both the North and the South will be able to use express trains.

The Moon administration also introduced an economic initiative that encompasses the entire peninsula with inter-Korean economic exchange in mind. The government created the so-called New Economic Map, which includes three economic belts along the coast in the west and east of the peninsula and the border between the North and the South, “seeking a single market for the two Koreas,” according to the Ministry of Unification.

Such a plan would require a tremendous amount of land development, experts think.

Park Se-ra, an analyst from Shinyoung Securities, predicted that North Korean infrastructure projects could create as much as 35 trillion won worth of new orders for South Korean construction companies. In 2017, the total orders South Korean companies received stood at around 42 trillion won.

Constructions companies, although hopeful, remain cautious and are taking a wait-and-see approach for now.

“It’s not for us to decide on any projects or plans because we need an outline from the government before we can make our move,” said a spokesperson from Hyundai Engineering and Construction.

The partnership will also enable South Korea to reach mainland China and beyond by land, a scenario that could make transporting goods considerably easier for logistics companies.

The Trans-Korean Railway (TKR) network, once open, would enable freight from South Korea to travel over 10,000 kilometers through Kaesong and other major cities in the North to as far away as Europe. It would connect to the Trans-China Railway (TCR) and Trans-Siberian Railway (TSR).

Experts say that, if this is realized, the cost of moving freight from Busan to the Netherlands, for example, would be slashed by as much as $1,000 and arrive 20 days earlier.

North Korea is also sitting on top of natural resources worth over $5 trillion, about 24 times more than reserves in the South, according to a study by the North Korea Resources Institute, a state-run research institute in the South. The institute estimated that the North has about 7 billion tons worth of magnesite, a mineral used in automobiles and aviation to lighten the vehicles. Other sources such as Statista estimate that North Korea has the second largest magnesite reserve in the world after Russia.

“If South Korean firms get the rights to mine natural resources in the North, the country could replace resource imports worth about 17 trillion won a year,” said Lee Kwang-soo, an analyst from Mirae Asset Daewoo.

Inter-Korean economic ties could also have some long term benefits for the South.

In particular, the resumption of economic exchange between the two Koreas would mean that the level of threat from the North has decreased dramatically, which would push down the so-called Korea discount.

Korea discount refers to the condition where global players undervalue South Korean stocks for a number of reasons that weigh down on the country’s economy, including the confusing corporate governance of local companies as well as the constant threats and nuclear missile tests from the North.

Global credit rating agencies, including Moody’s and S&P, have been cautious about raising South Korea’s credit rating despite the summit, saying that the North needs to show it’s committed to its plan for economic development.

There are, however, hurdles to overcome along the way.

“There are a number of issues we need to settle such as the timing and pace, as in when and how quickly inter-Korean economic cooperation should be resumed,” said Park of the KDI.

Economic sanctions slapped on the North by the international community also make it impossible for South Korea to resume its economic exchange with the North. Sanctions will not be lifted until the North commits to its word and carry out “Complete, Verifiable, and Irreversible Denuclearization,“ as the U.S. government puts it.

“When can we determine that North Korea has been denuclearized, and can South Korea make a special case and cooperate with the North despite international sanctions given the uniqueness of the relationship?” questioned Park. “[South Korean officials] will also need to build a consensus in terms of the direction of the policies. These are the issues that must now be addressed before the inter-Korean economic cooperation can take a concrete shape.”

The government must also reassure companies concerned about the slew of risks that come from entering into North Korea before they can commit to the cause.

“South Korean companies want assurance that their investment will be protected and that there will be no sudden suspension of exchange,” said Chung of the FKI. “Many of them agreed that we need a consistent policy towards North Korea even when the administration changes.”

Depending on the relationship dynamics between the North and the South, it is entirely possible for South Korean companies to be kicked out of the North again despite having spent billions of won in the country, incurring huge losses.

The Unification Ministry’s findings also showed that the financial losses for the South Korean companies from Kaesong totaled around 950 billion won after they left the complex in 2016.

One of the companies has decided to relocate its production plant to Vietnam, according to the Corporate Association of Kaesong Industrial Complex, a group that represents the tenant companies. An official from the association explained that the company is likely to sever ties with its suppliers, some 240 companies, which would put their workers at risk.

“Since the complex was shut down, about 1.5 trillion won worth of assets from the South Korean government and companies have been in lockdown,” said Lim Eul-chul, a professor at Kyungnam University and the director of the center for International Cooperation for North Korean Development.

As a result, industry players are calling on the government to work with the North to reopen the complex as soon as possible.

“Of course,” answered Shin Han-yong, chairman of the corporate association of Kaesong Industrial Complex and CEO of Shinhan Trading, when asked whether the companies are willing to return to Kaesong. His company also operated a factory in the complex before forced out in 2016. “We are ready to go as early as in May but, realistically, I think we will have to wait until the summit between the United States and North Korea.”