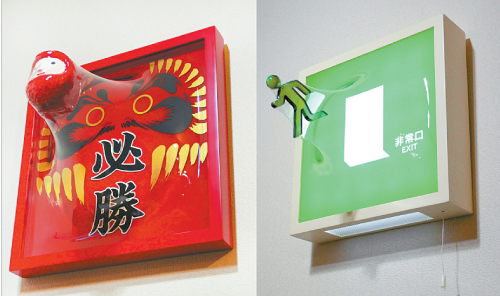 To May 17: At museums, it’s not uncommon to find people staring at a piece of artwork and harping on about how realistic it looks. For Yuki Matsueda, such comments are not rhetorical exaggerations.

Many of the artist’s famous three-dimensional works include a background painted on a flat canvas and a character or symbol trying to break out of that canvas. All that stands between the runaway figurines and the surface is a transparent layer of plastic that works as a connection between the two dimensions.

The witty pieces are fun to look at, but they are more than just an eye trick. By experimenting with various genres of art through objects that are commonly found around us, Matsueda crosses the border between several genres - from painting and print-making to sculpture and installation.

Some 40 pieces are on display at the exhibition, including some of his most famous works such as the two versions of “This is EXIT square” (2013) and a special installation that the artist created especially for this exhibition.

To May 20: This exhibition, featuring two Korean artists, Cody Choi and Lee Wan, and curated by Lee Dae-hyung, is similar to one that took place last year at the Korean Pavilion of the 2017 Venice Biennale.

The installation of flashy neon signs by Choi, which covered the Korean Pavilion’s facade and became an “Instagram star” at the biennale, is now installed on the first floor of the Arko Art Center. Other works by Choi, including the hot pink sculpture “The Thinker,” are also on the floor.

Lee Wan’s work is on the second floor and includes an installation of hundreds of clocks titled “Proper Time,” a piece that wowed visitors at the biennale. Lee’s “Mr. K,” which consists of found objects related to Korea’s modern history, has been expanded for this show.

Admission is free. The museum is closed on Mondays. Get off at Hyehwa Station, line No. 4, exit 2.

To May 24: At this exhibition, old Korean paintings have been turned into moving images in an attempt to appeal to younger audiences.

Co-organized by the Kansong Art and Culture Foundation and the Seoul Design Foundation, visitors can witness not only original paintings by two of Korea’s most influential and pioneering artists - Sin Yun-bok (born 1758) and Jeong Seon (1676-1759) - but also media artworks inspired by the two masters’ works. 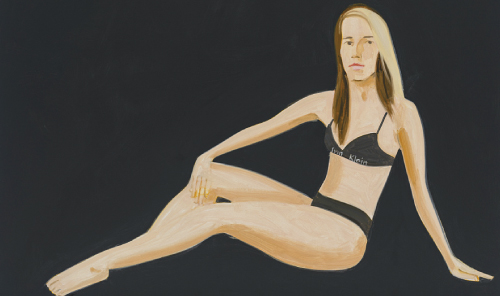 To July 23: Comparing a painting to a commercial advertisement might not sound like praise, but there’s no better way to describe the work of American artist Alex Katz. At times, his pieces look as if the artist had been commissioned by certain brands to paint something exclusively for them.

Katz is known for his portraits that depict women posing as if they are being shot by a camera against a monotone background - just like models in a commercial shoot. At the Lotte Museum’s exhibition, about 70 of these portraits are on display.

Rather than illustrating the women and their beauty in a detailed way, Katz uses images of a certain brand to speak on the women’s behalf - energetic and modern for Coca-Cola, chic and cool for Calvin Klein. In doing so, he has created a distinct style that has earned him fame.

The Coca-Cola series and Calvin Klein series have been especially created for the Korean audience, and are revealed for the first time in this exhibition.

A BLOOMING FLOWER OUT OF DESPAIR

Admission is free. The museum is closed on Mondays. Get off at Bexco Station, line No. 2, exit 5.