In the ancient city of Nisa in Turkmenistan, where horseback riders of the Parthian tribes traveled along the Silk Road that snaked through the deserts, there are still fortresses that have stood for thousands of years under the blazing sun and winking stars.

“This place is named the Parthian Fortresses of Nisa, which was the capital of the Parthian Empire,” said Turkmen Ambassador to Korea Myrat Mammetalyyev. “It was a location important not only to Turkmenistan but to the civilizations of the era.”

The Parthian Empire, one of the major powers in the region for a couple of centuries from mid-300 B.C., held its capital in Nisa, some 10 miles southwest of Turkmenistan’s capital Ashgabat. The empire used to control sections of the Silk Road that passed through Karakum Desert and the fortresses served as protective walls around the hub of the trading center.

“The Parthian Fortresses of Nisa is also one of three Unesco cultural heritage sites in Turkmenistan,” said the ambassador. “You can take a look in and around the fortresses within a day, and there are so many others within the country to visit — we are home to 1,300 historical and cultural monuments.”

Thousands of miles away, just on the outskirts of Seoul, also sits a fortress, also a Unesco cultural heritage site and one that protected the capital city of the Baekje Kingdom (18 B.C.-600 A.D.) some 2,000 years ago.

“We heard that the Namhansanseong Fortress used to be the capital city of Baekje, and that it proved still more important afterwards,” said the top envoy. “It was the emergency capital of the Joseon Dynasty [1392-1910], when King Injo fought off the Qing invasion in the 17th century.”
“And it seems like the fortress is quite loved by the people of Korea,” said the top envoy’s wife Tazegul Mammetalyyeva. “Korea has novels on it and recently made a movie about it, right?”

“It’s interesting, because if the fortresses of Nisa kept off the foreign powers, including the Roman Empire, from expanding in the region, then it looks like the Namhansanseong also served a similar purpose in trying to ward off foreign expansions,” said the ambassador.

The couple sat down with the Korea JoongAng Daily to discuss how the two capitals and their surrounding areas became home to both centuries of traditions and modernity. The following is an excerpt of the interview.

Left, a bird’s-eye view of the Parthian Fortresses of Nisa, which were designated as a Unesco World Heritage Site in 2007. The fortresses sit a few miles outside of the country’s capital city of Ashgabat. Right, an Akhal-Teke horse, a Turkmen breed, which many Turkmen describe as “wings from heaven.” [TOURISM COMMITTEE OF TURKMENISTAN]

Q. What should we look for when visiting the Parthian Fortresses of Nisa?

A. Myrat Mammetalyyev: You will get to see the evidence of the ancient culture prevalent throughout the city of Nisa for ages. The archaeological excavations at the fortresses continue to provide new results that illustrate the mix of culture of Central Asia and the Mediterranean. With Nisa, there is the Old Nisa and the New Nisa. The Old Nisa refers to the landmark at the bottom of the Kopet-Dag Mountains on the outskirts of Ashgabat. At the end of the Parthian period, the city was moved a few kilometers to the west, to New Nisa. This city served as an important location for the Silk Road.

Tazegul Mammetalyyeva: Turkmenistan designates each year with a special name. This year, it’s called, ”Turkmenistan, the Heart of the Silk Road.” Ongoing projects under this theme include the railway that is to connect Turkmenistan to Afghanistan and Tajikistan in the region. A new international airport just opened in Ashgabat. These projects will boost regional trade and exchanges, just as they bloomed at the peak of the Silk Road era.

Mammetalyyev: We are also installing a gas line that connects Turkmenistan, Afghanistan, Pakistan and India, which will include the former routes of the Silk Road. The project started two years ago. In his book published this year, President Gurbanguly Berdimuhamedov emphasizes the importance of each route in the Silk Road.


What other destinations in Turkmenistan do you recommend to visitors?

Mammetalyyeva: We can put a long list of sightseeing such as the Carpet Museum, National Museum, Museum of Fine Arts, Oguzhan Statue and Fountain Complex, Ferris Wheel, Akhal-Teke horse stables and farms, Independence Park and others. Definitely visit the other Unesco World Heritage sites, including the Ancient Merv. The archaeological park is one of the oldest and most preserved oasis cities along the routes of the Silk Road in Central Asia.

Mammetalyyev: You can also go horseback riding through the desert or prairies, or see a horse race at a stadium. Turkmenistan’s horses are beautiful and strong and they are very well known. You know the Akhal-Teke horse, a breed from Turkmenistan, is the symbol of the country. Every year in Turkmenistan we celebrate the Turkmen Horse Day on the last Sunday of April. Our government invites horse experts from all over the world to join the celebration. Actually I once met a man in Jeju Island who has an Akhal-Teke horse.

Mammetalyyeva: Horses are very special for our country. Eating horse meat is now prohibited by law — but even in the past, people chose not to eat it, because horses are like family to us. We give them names and adorn them with special jewelry.

Mammetalyyeva: But be aware that there may be some unwanted guests in the desert with you — the snakes. But did you know you can keep them off with sheep wool carpets? Snakes do not like the smell of sheep.

Why are there five different carpet patterns on the flag of Turkmenistan?

Mammetalyyev: They signify the five major regions of Turkmenistan. Each region has different music, traditional dances and carpet patterns, and the distinctions render our culture that much more varied and colorful.


Why is Ashgabat called the city of white marble?

Mammetalyyev: Ashgabat is famous in world history as a place of emergence of a settled life, ancient agriculture, crafts, ornamental and art works. In 1948 a terrible earthquake destroyed Ashgabat. In spite of that, the capital was newly built, and for the last 20 years much with white marble. The city is quite beautiful, you have to come see it for yourself.

Mammetalyyeva: Ashgabat can be translated into something like “the city of love.” So who knows, you may come here and fall in love with the city, or maybe find your love. 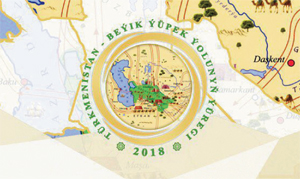 Diplomatic ties between Turkmenistan and Korea were established in February 1992. In 2007, the Korean Embassy was established in Ashgabat, while the Embassy of Turkmenistan opened here in 2013. A modern strengthening of relations between the two countries was laid within the framework of state presidential visits to the two countries in 2014 and 2015.

Over several years, major Korean companies including LG, SK, Hyundai, Samsung, Daewoo and Kia Motors have been operating successfully in the Turkmen economy. Nearly half of Ashgabat’s buses and taxis are imported from Korea.

Myrat Mammetalyyev arrived in Seoul in April 2014 to serve his first ambassadorial post. He previously held various positions at the Turkmen Ministry of Foreign Affairs, serving as head of the Department of European Countries from 2008 to 2013 and head of the International Information Department from 2013 to 2014. Since 2016, he has been concurrently serving as Turkmenistan’s top envoy in Singapore and Korea. The ambassador’s wife Tazegul Mammetalyyeva worked as a scientific researcher at the country’s Institute for State and Law. The couple has a 13-year-old daughter and an 11-year-old son.