Seoul’s streets light up for Buddha’s birthday : The annual parade brings together generations for a colorful and jovial jubilee

Seoul’s streets light up for Buddha’s birthday : The annual parade brings together generations for a colorful and jovial jubilee 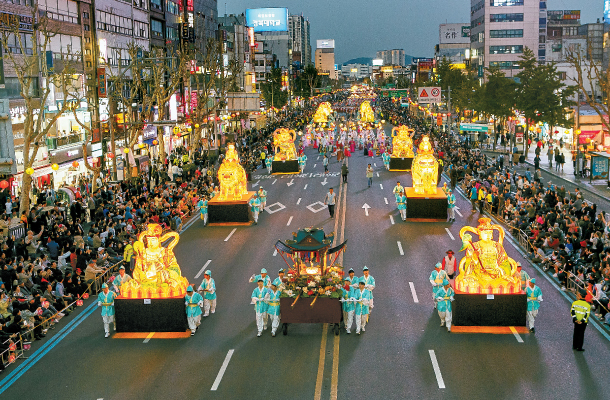 A lantern parade, held as part of the Yeondeunghoe, meaning Lotus Lantern Festival in Korean, in central Seoul last year on April 29, travels from Dongdaemun to Jongno. This year’s procession will take place on May 12 in the same area. [YEONDEUNGHOE PRESERVATION COMMITTEE]

Seoul is famous for its nightscape, with buildings brightly lit up late into the night throughout the city. On May 12, a parade of lanterns will add even more colorful lights to the streets of central Seoul in celebration of Buddha’s birthday during a festival dubbed Yeondeunghoe.

The coming of the sage falls on April 8 of the Lunar calendar each year - that’s May 22 on the solar calendar this year. The holiday has been celebrated in Korea for over 1,200 years since the Unified Silla Dynasty (676-935) when Buddhism was the national religion. At the time, people took part in the event by lighting up lanterns in the shape of lotus flowers, symbolizing how Buddha enlightened the world with his wisdom and mercy. The lotus flower represents beauty, purity and holiness in Buddhism, and many sculptures of Buddha have him sitting either on or in front of lotus flowers.

Although Korea is no longer an exclusively Buddhist country, the tradition lives to this day to remember the peace and mercy that Buddha taught his disciples, a message that resonates through generations regardless of religion or beliefs.

Though the essence of the event lies in celebrating Buddha’s arrival, the festival embraces people of all faiths to unite under a message of philanthropy. Yeondeunghoe was recognized for its social significance in 2012 and has been designated Korea’s National Intangible Cultural Property No. 122. The event was attended by over 300,000 people last year and has been selected as one of the “World’s 10 Best Fantastic Festivals of 2018” by The Travel Magazine this year. 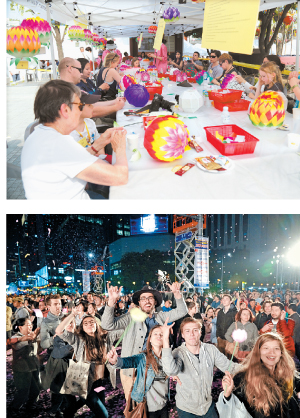 Foreign visitors can enjoy the festivities, above, or get a more hands-on experience making their own lanterns, top, near Gyeongbok Palace Station, Jonggak Station, Anguk Station and Jogye Temple. [YEONDEUNGHOE PRESERVATION COMMITTEE]

As the event takes on different themes each year according to particular socio-cultural situations in Korea, this year’s festivity revolves around the slogan “Wisdom and Compassion Make the World Beautiful,” in hopes of bringing peace and harmony to people’s minds through Buddha’s words in the fast-changing world. Last year focused on messages of hope and reconciliation during the social and political turmoil under the slogan of “A World Without Discrimination.”

The celebration began on Wednesday at Gwanghwamun Square in central Seoul with the lighting of a giant replica of the Seokga Pagoda made out of hanji (traditional Korean paper), a three-storied stone pagoda located at Bulguk Temple, North Gyeongsang. It will stay lit for the duration of the festival, which ends on May 22.

The parade will begin at 7 p.m. on the evening of May 12. It will start at Dongguk University in central Seoul and continue south through Dongdaemun to the streets of Jongno and finish its precession at Jogye Temple - a total parade route of 4.5 kilometers (2.8 miles). Participants will be able to enjoy a variety of unique lanterns designed on different themes.

One particularly interesting detail to take note of is that the parade, which is filled with tens of thousands of beautiful lanterns every year, will include 19 lanterns designs that have been traditionally used in regions that are now in North Korea this year. The traditional North Korean lanterns are more faithful to the historical shapes and are simpler in shape and longer in length than those used in South Korea, according to Hong Min-seok, the publicist for the Yeondeunghoe Preservation Committee. 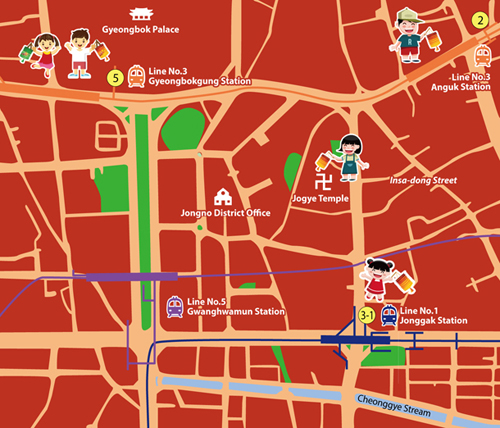 “Though the dates are unclear, the lanterns have been restored from old records in North Korea by researchers and the committee,” said Hong.

Yeondeunghoe offers a variety of other cultural experiences other than the lantern parade and the lights in Gwanghwamun Square. An exhibition of traditional lights will be set up at the Jogye Temple, Bongeun Temple in southern Seoul and Cheonggye Stream in central Seoul, from May 11 to 22, where visitors can see beautiful lanterns that remain true to the shapes of lanterns from centuries ago.

Eoulim Madang will be a festival of energetic performances and fun songs for a Buddhist cheer rally, held from 4:30 p.m. to 6 p.m. at the Dongguk University Stadium in central Seoul before the parade kicks off. Some 1,000 people from 40 different groups will put on performances before the procession of lights begins at 7 p.m. from the university.

A finale with music and performances will take place at the Jongno 1-ga intersection just outside Jonggak Station, line No. 1, at the Hoehyang Hanmadang where the participants of the parade and onlookers can enjoy the fun performances together and share warm wishes with each other after the parade ends at 9:30 p.m. To add a modern twist, DJs will play popular music to energize the night of traditional culture. 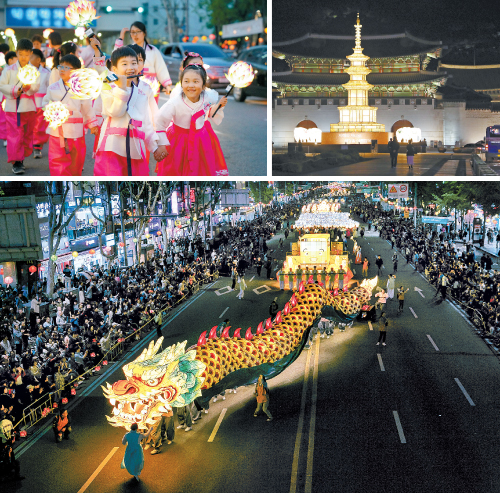 Although Yeondeunghoe is a tradition that goes back hundreds of years, the event still serves as a festival of peace and gathering today. Left, children parade through the streets. Right, the lantern parade in 2017. Center, a lantern shaped like a stone pagoda was lit on Wednesday last week. [YEONDEUNGHOE PRESERVATION COMMITTEE]

Sunday, May 13, will provide a more peaceful gathering starting with traditional performances and cultural experiences at 12:00 p.m. in front of the Jogye Temple. A total of 130 booths will be set up along the street for visitors to look around and get hands-on experience with a variety of activities ranging from meditating to making your very own T-shirt to tasting traditional food. The booths will close at 7 p.m., and performances will take place for the duration of the event.

The weekend will end with a mini-parade known as Yeondeungnori from Jogye Temple to Insa-dong and back to the Jongno 1-ga intersection.

There will be four booths set up at four different spots where foreigners may come and make their very own lanterns. In booths next to Gyeongbok Palace, outside Gyeongbok Palace Station line No. 3, Jogye Temple, Anguk Station line No. 3 and Jonggak Station, will be stationed staff members who can speak Korean, English, Japanese and Chinese. If you wish to take part in the lantern-making contest, reservations can be made via email to idia@buddhism.or.kr.

Other details regarding the event are available on the website, www.llf.or.kr/eng. For more information, call (02) 2011-1744.