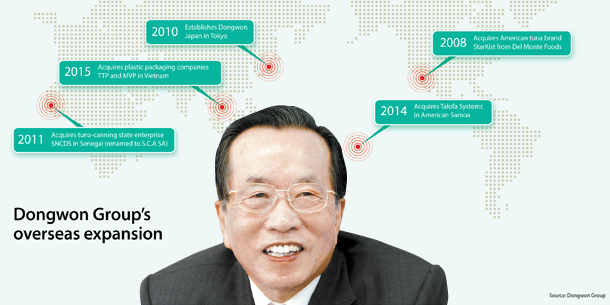 After seven years, Dongwon Group has finally started to see results from its expansion into Africa, as S.C.A SA, the tuna cannery it acquired in 2011, recorded a surplus for the first time.

In November 2011, Dongwon acquired SNCDS, a tuna-canning state enterprise in Senegal, which it renamed S.C.A SA. Dongwon was drawn to Senegal for its strategic location near Europe and the Middle East, as well as low labor fees and a sizeable catch quota.

The Korean tuna giant expected smooth sailing, having faced few difficulties when it bought the iconic U.S tuna brand StarKist from Del Monte Foods in 2008 to advance into the North and South American markets. 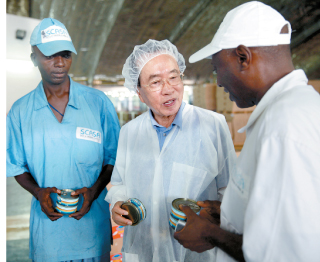 But doing business in Senegal proved to be more challenging than expected, largely due to cultural differences. Not only were local employees unaccustomed to arriving at work at specific times, but polygamous marriages, a common practice in the country, meant they had to skip work to attend many family events during the week. Whenever the company tried to enforce adherence to Korean workplace protocols, it only worsened relations with the employees and brought down productivity.

As debt piled up over the years with no signs of improvement, Dongwon began to seriously consider shutting S.C.A SA’s doors in mid-2016.

But Kim Jae-chul, the 83-year-old founder and chairman, refused to entertain the idea.

“It would hurt the group’s global strategy and create stumbling blocks for other Korean companies trying to expand into Africa,” he explained.

Instead, Kim ordered the supervisors at S.C.A SA to revamp management by localizing the work culture and helping the Senegalese employees to feel comfortable. Korean managers began attending the local workers’ family events, travelling up to six hours at a time. The company also provided them with soccer shoes and soccer nets, recognizing the country’s love for the sport. An incentive system was introduced to boost workers’ motivation.

Dongwon Industries, the fishing and transport arm of Dongwon Group, also chipped in by sending fishing boats and tuna of the highest quality to S.C.A SA.

Kim’s efforts didn’t go unrewarded. As the Senegalese employees began warming up to their Korean managers, work efficiency and product quality rose. Now, S.C.A SA processes 15,000 tons of fish annually, up from the 5,000 tons the company was processing at the time of acquirement. It even trades with American clients.

The tuna manufacturer currently employs 600 Senegalese workers, but hopes to raise this number to 1,000 by the end of this year. Its activities are estimated to add 40 billion won ($37 million) to the Senegalese economy.

“My goal is to expand the business into all of the world’s oceans and continents, and with S.C.A SA, I am getting closer to that goal,” Kim said. “I will focus more on global than domestic management. Because Korea is small in size and has few resources, Korean companies can only succeed with international expansion.”

Taking advantage of Senegal’s location, Dongwon plans to grow its business in the Middle East, attractive for its high income levels and demand for tuna. It has already branched out into the South Pacific by acquiring Talofa Systems, a tuna manufacturer in American Samoa, in 2014, as well as into Southeast Asia by acquiring Vietnamese plastic packaging companies TTP and MVP in 2015.

Among Koreans, Kim is referred to as the modern Jang Bogo, a famous naval commander during the Silla dynasty (57 B.C. — 935 A.D.) who rose from humble beginnings to gain near-monopolistic control of naval trade. Like Jang, Kim worked hard to climb to the highest ranks of the global fishing world. He entered the industry in 1958 at age 23 as a fisherman, before serving as a captain and sailing around the South Pacific.

Since establishing Dongwon Industries in 1969, Kim has now grown Dongwon Group into a conglomerate with 16 subsidiaries spanning diverse industries from fishing to transport.