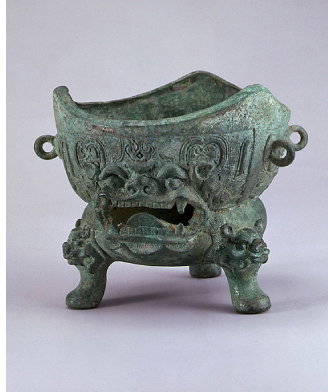 This bronze brazier is supported by an elaborate stand decorated with the faces of monsters.

The mouth of the brazier has three triangular spots higher than the other sides.

Two handles are attached to the sides of the body.

Adornments were probably attached to the handles, but they are now gone.

Inscribed on the lower part of the body is a demon face with its mouth open, supposedly intended to let in wind.

Overall, the object has been preserved in good condition.

Its appearance is similar to that of an incense burner.

The opening on the lower part of the body leads one to assume that it was used as a brazier for cooking or tea making.