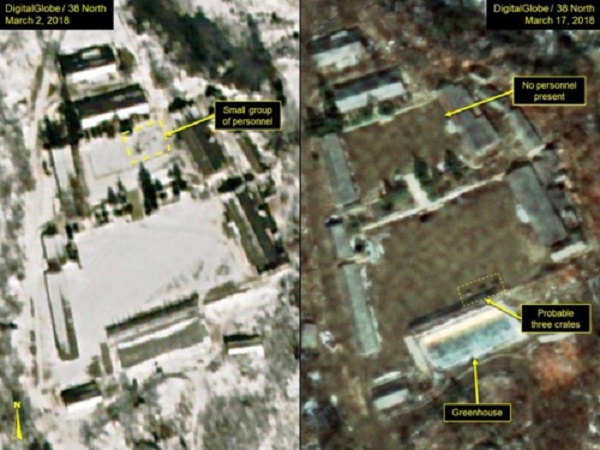 “Some say we are only closing down parts [of the nuclear site] that are not functioning, but you will find once you make a visit that there are two giant underground tunnels in addition to the ones that were known previously,” Kim was quoted as saying by Yoon Young-chan, the senior presidential secretary for public affairs.

“And they [the two tunnels] are functioning very well.”

Kim’s comments on the two previously unknown tunnels appeared to have been made to quell suspicions by North Korea critics that the North was making a meaningless gesture by demolishing two old underground tunnels than can no longer function after being damaged in six nuclear tests.

Kim’s promise to close the nuclear site next month jibes with a landmark decision made on April 20 at a plenary session of the Central Committee of the Workers’ Party of Korea in which Kim declared there would be no more nuclear and intercontinental ballistic missile tests and he would close down the Punggye-ri nuclear test site, about 600 kilometers (372.8 miles) northeast of Pyongyang, the North’s capital.

Another sign that Kim might be serious about dismantling his nuclear arsenal is the North’s state-run media’s detail coverage of the April 27 summit. Running a total of 61 summit-related pictures on four pages of its April 28 edition, the Rodong Sinmun gave detailed accounts of the Moon-Kim meeting.

In another sign of mending ties with Seoul, Kim said he would turn back North Korean standard time. In 2015, Pyongyang declared a North Korea Standard Time that is 30 minutes later than in South Korea, an expression of disgruntlement with the conservative Park Geun-hye government’s North Korea policy.

Talks between officials from Red Cross from the South and North to arrange reunions of families separated by the 1950-53 Korean War will also take place in the coming weeks.

The two agreed to hold reunions on the occasion of Aug. 15, or Liberation Day. The last family reunions took place in October 2015.