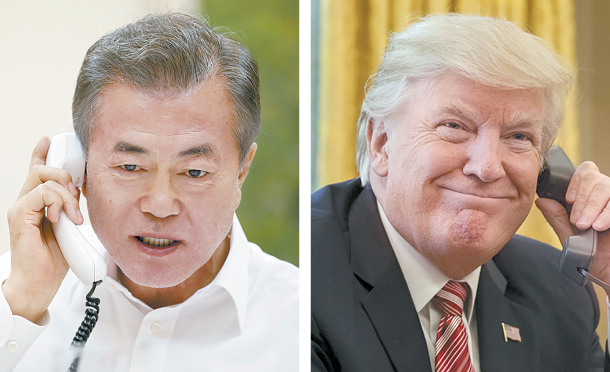 U.S. President Donald Trump lauded the inter-Korean summit in a phone call with South Korean President Moon Jae-in late on Saturday, according to the Blue House, and the two leaders agreed to come up with concrete measures to lead to the “complete denuclearization” of the Korean Peninsula.

The two leaders spoke on the phone from 9:15 p.m. for 1 hour and 15 minutes to discuss the results of the historic summit between Moon and North Korean leader Kim Jong-un that took place on Friday, said Kim Eui-kyum, the Blue House spokesman, on Sunday, and agreed for the speedy holding of a North-U.S. summit to keep up the momentum.

Trump said that the joint declaration by Moon and the North Korean leader Kim to achieve a nuclear-free Korean Peninsula was “very good news” not only for the two Koreas but for the entire world, according to the Blue House.

Moon in turn said that Trump’s great decisions contributed a lot to the holding of the inter-Korean summit and for the upcoming North-U.S. summit.

The inter-Korean summit serves as a foundation for the Trump-Kim summit, planned to be held as early as late May, and Moon said that Seoul and Washington will closely cooperate on how to approach the “complete denuclearization” issue raised in the joint Panmunjom Declaration announced by the two Koreas Friday.

The two leaders further discussed a shortlist of two or three countries where the North-U.S. summit could be held.

Trump was said to have prioritized his phone call with Moon, according to Kim, an indication of good coordination between Seoul and Washington.

After the phone call with Moon, Trump immediately tweeted Saturday: “Just had a long and very good talk with President Moon of South Korea. Things are going very well, time and location of meeting with North Korea is being set,” referring to his own high-stakes summit with Kim Jong-un.

“I think we will have a meeting over the next three or four weeks,” Trump said later at a campaign rally in Michigan, adding, “it’s going be a very important meeting” on “the denuclearization of the Korean Peninsula.”

He said he spoke to Moon over phone that morning “for a long time,” who, he said, “gives us tremendous credit.”

Recalling the tensions of three or four months ago, caused by vitriolic rhetoric exchanged between Washington and Pyongyang raising concerns of actual war, Trump said, “Strength is going to keep us out of nuclear war.

“A lot of good things are happening over there,” said Trump, as attendees at the rally chanted, “Nobel!”

Trump concluded, “We’re going to have hopefully a very successful negotiation over the next three or four weeks, and we’ll be doing the world a big favor. Let’s see how it goes. I think we’ll do fine.”

There is keen interest in how the Trump-Kim summit will follow up to the inter-Korean summit, with Trump revealing that the locations for his meeting with the North Korean leader has been narrowed to two or three places after talks with German Chancellor Angela Merkel at the Oval Office on Friday.

“A lot of very positive things happened over the last 24 hours,” Trump said to reporters. “We’re in total touch with both North Korea and South Korea.”

He added, “We have it broken down to probably two sites now, two or three sites, locations. And hopefully we’re going to have great success.”

Singapore and Mongolia have been raised as potential locations for the venue of the summit, though Washington and Seoul officials have not officially confirmed the shortlist.

Trump elaborated that “the relationships are building and building strongly” and that this “would be a great thing for the world.”

“I don’t think he’s playing,” Trump said on North Korean leader Kim Jong-un’s sincerity. “It’s never gone this far; I don’t think it’s ever had this much enthusiasm with them wanting to make a deal.”

He also gave credit to Chinese President Xi Jinping who he said “has been very helpful” at its border with the North.

Moon and Kim agreed in their joint declaration to try to officially end the 1950-53 Korean War through a peace treaty by the end of this year in talks involving the two Koreas, the United States and possibly China, and Trump voiced support for this.

Soon after the joint Panmunjom Declaration was announced Friday, Trump tweeted: “KOREAN WAR TO END” and added that the United States “should be very proud” of what is taking place.

The White House in a statement Friday after the inter-Korean summit kicked off said, “We are hopeful that talks will achieve progress toward a future of peace and prosperity for the entire Korean Peninsula,” and went on to say that Washington “looks forward to continuing robust discussions in preparation for the planned meeting between President Donald J. Trump and Kim Jong-un in the coming weeks.”

Photos of U.S. Secretary of State Mike Pompeo meeting North Korean leader Kim Jong-un in Pyongyang from the former CIA director’s visit at the beginning of the month were released by the White House over Twitter on Friday, a day after Trump forecast the photographs would be released in a Fox News interview.

On Saturday, South Korean Foreign Minister Kang Kyung-wha held her first phone conversation with Mike Pompeo, who was confirmed by the Senate as the new U.S. secretary of state Thursday.

In a more reserved statement, U.S. President Vice President Mike Pence said Sunday, “The Korean peace agreement is a step toward denuclearization of the Korean Peninsula, but it is just one step. Any talks, promises, and assurances from North Korea will be met with reservation, vigilance, and verification.”

He added that as plans for the U.S.-North Korea summit continue, “the pressure campaign will continue unabated.”

North Korea’s state-run Rodong Sinmun newspaper on Saturday in a rare move covered the inter-Korean summit from pages 1 to 4, with dozens of photos and a full text of the Panmunjom Declaration.

Moon also held a 45-minute phone conversation Sunday morning from 10 a.m. with Japanese Prime Minister Shinzo Abe, during which Abe lauded the mention of “complete denuclearization” in the Panmunjom Declaration, according to presidential spokesman Kim.

Abe was quoted as saying that North Korea appeared to be “forward-looking.”

Moon was said to have relayed that Kim Jong-un was always willing to hold talks with Abe and that North Korea would like to normalize relations with Japan. Abe replied that Tokyo will be looking for an opportunity for talks with Pyongyang.

Abe told reporters after the call that he thanked Moon for raising the issue of Japanese abductees.

Moon also had a phone call with Russian President Vladimir Putin at 5:35 p.m., in which Putin emphasized the importance of trilateral cooperation among the two Koreas and Russia.