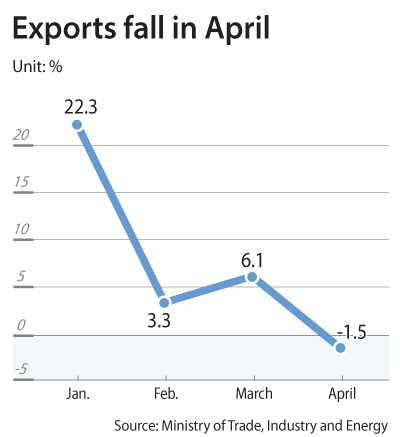 Korea’s exports fell in April compared to a year ago, breaking a 17-month growth streak.

According to the Ministry of Trade, Industry and Energy on Tuesday, outbound shipments from Korea this April were $50.06 billion, a 1.5 percent decline from the same time last year. The last time Korean exports fell was in October 2016, when they retreated 3.2 percent year-on-year.

Last month’s decline in exports comes after Korea enjoyed a record-breaking year in 2017.

Officials at the Trade Ministry attributed the fall to a bumper growth last April, when monthly exports jumped by over 20 percent to $50.8 billion after Korean shipbuilders delivered two offshore oil drilling platforms worth $5.45 billion.

Total shipments from January to April this year came to a record-high $195.5 billion, another indicator of healthy exports.

Petrochemical products exports also grew year-on-year for the 19 month in a row, up 11.7 percent to $4.12 billion, thanks to robust global demand and the rising price of oil.

Automakers had mixed results in April, the data showed.

Car shipments fell for three straight months, down 8.6 percent year on year to $3.55 billion, but auto parts exports finally turned around after a 14-month losing streak, growing 6.6 percent to $2.03 billion. Korea’s exports face a number of risks, including protectionism, the government explained.

The United States and China are currently locked in a trade dispute with U.S. President Donald Trump demanding that Beijing cut the annual trade deficit the United States has with the Asian country by as much as $100 billion. President Trump is sending an envoy this week to Beijing to settle the trade dispute between the world’s two largest economies, who are also Korea’s major trade partners.

Kim Young-sam, the deputy minister for trade and investment, said the government will help Korean companies expand their markets through policies aimed at deepening ties with countries in Southeast Asia and Russia.