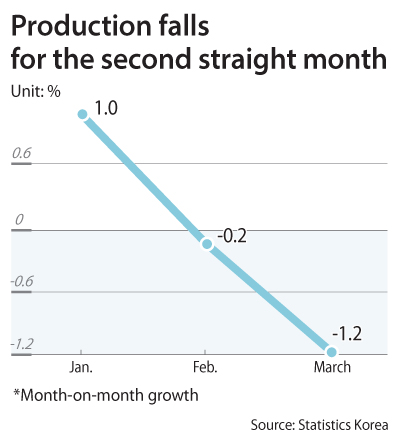 The percentage of Korean factories that are operational fell to the lowest level since the global financial crisis this month amid a tumble in the country’s overall production.

According to Statistics Korea on Monday, the country’s overall production fell by 1.2 percent in March compared to the previous month, the biggest drop in 26 months.

“The index of the service industry went up, but mining and manufacturing industries and the construction industry went down from the previous month,” said the statistics agency in a press release.

Production in construction declined by 4.5 percent, the data showed, while service industry went up by 0.4 percent. Production in the manufacturing sector took an especially heavy blow. While the production of some products, such as semiconductors and transportation equipment, rose, automobile and machinery production fell by 3.7 and 4.3 percent each.

According to Statistics Korea, this caused the “mining and manufacturing industries” to retreat by 2.5 percent in March.

Auto production was speculated to have taken a hit when GM Korea decided to close down its factory in Gunsan, North Jeolla, but an official from the statistics agency said that falling car exports played a bigger role. The government data showed that automobile exports fell by 8.6 percent in March.

Factory operation rates tumbled along with production, falling 1.8 percentage points from the previous month to 70.3 percent, the lowest level in nine years. The last time the factory operation rate fell around 70 percent was in March 2009 when the rate dropped to 69.9 percent in the wake of the global financial crisis. Facilities and equipment investment also dipped by 7.8 percent in March.

In the first quarter, however, overall production rose by 0.2 percent from the previous quarter.

“Mining and manufacturing industries and [facilities and equipment] investment experienced a temporary adjustment after growing in January and February,” said an official from the Ministry of Strategy and Finance.

But despite the positive outlook from the government, some market experts think that the data from March is an indication that economic conditions are worsening in many sectors.

“The production, shipment and inventory trends from March demonstrate that the economy for [different] industries, excluding a few such as semiconductors, is slowing down,” said Lim Hye-youn, an economist at Daishin Securities.

“Unless major manufacturing industries such as automobiles and steel recover, it might be difficult [for Korea] to achieve its 3-percent growth target,” said Lee Geun-tae, a senior researcher at the LG Economic Research Institute.