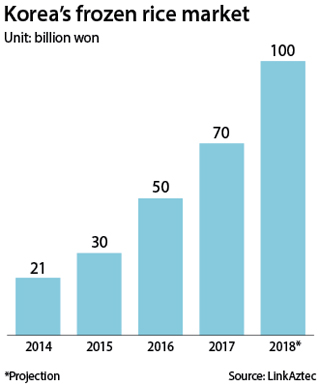 Korea’s frozen rice market is exploding, as producers diversify their lineup of dishes for the growing number of people living alone.

According to statistics from CJ CheilJedang and market research firm LinkAztec on Tuesday, the local frozen rice market was worth 70 billion won ($65 million) last year, growing about three times from 21 billion won in 2014.

The rapid growth is expected to continue this year. As of February, the frozen rice market was worth 13 billion won, a 30 percent increase compared to the previous year. The research firm anticipates the market will reach 100 billion won this year.

While rice is an indispensable part of Korean food culture, frozen rice was not a popular option until recently due to sometimes unpleasant texture.

Recent technological advancements have spurred sales of the product, and a wider variety of frozen foods using rice have appeared on the market.

The industry’s growth is fueled by fierce competition among food companies to profit from the growing demand for home meal replacements, backed by the increase in single-person households.

CJ CheilJedang, for example, cooks the rice in frozen items in iron pots before packaging them in order to improve the texture and taste.

Most food companies started with fried rice as their first frozen rice item, but now, they are ramping up their developments and serving up more frozen rice dishes.

Pulmuone entered the market with frozen fried rice in 2009, and later expanded its lineup to rice cooked with seasoned vegetables, or bibimbap.

This year, it added types of gukbap, which is rice served with soup, such as beef stew or spicy seaweed soup.

The frozen rice market is currently dominated by three major players: CJ CheilJedang, with 35.5 percent of the market, Pulmuone with 20.2 percent and Ottogi with 15.4 percent.