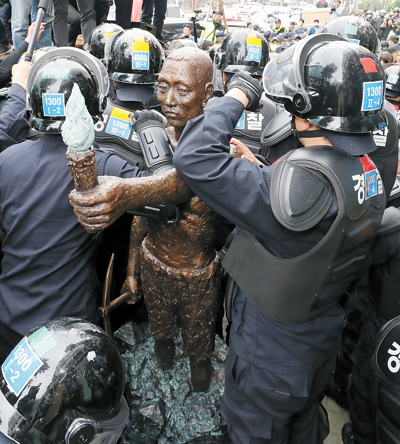 Police guard a statue symbolizing Koreans who were forced into labor by the Japanese during the early 20th century near the Japanese consulate in Busan on Tuesday after seizing it from activists who attempted to install it outside the building. [YONHAP]

Police clashed with activists who tried to erect a statue symbolizing Koreans forced into labor by the Japanese during the early 20th century outside the Japanese consulate in Busan from Monday night into Tuesday afternoon.

Despite disapproval from the Busan city government and Ministry of Foreign Affairs, hundreds of activists began hauling a giant bronze statue to the consulate at around 10:30 p.m. on Monday. They were met by about 500 police officers.

Between 1910 and 1945, when Japan exerted military control over the Korean Peninsula, about 58,000 Koreans were reportedly shipped to Japan and forced to work in 23 coal mines, steel mills and shipyards under brutal conditions. The statue emulates one of the miners, with a pickaxe in one hand and torch in the other.

“Protect the labor statue,” the group repeatedly shouted as they tussled with police.

Activists from several civic groups originally planned to install the statue at 3:50 p.m. Tuesday on the occasion of International Workers’ Day, but they hastily changed plans when authorities began preventing the group from assembling within 100 meters (330 feet) of the consulate on Monday, citing regulations that ban rallies within 100 meters of a foreign mission.

The group had arranged a sit-in about 100 meters away from the consulate on Monday and planned to make its way closer to the consulate the next day to place the statue next to a statue of a “comfort woman” that organizations put up in December 2016.

“If you’re going to take people, then take everyone,” one activist shouted through a microphone as officers dragged people away. “Even if only one person remains, we are not going to give up on the statue.”

Tensions eased at around 7 a.m. Tuesday after people left throughout the night and some officers retired to their precinct, but the conflict escalated at around 9 a.m. when activists held a news conference and moved the statue 10 meters closer to the Japanese consulate.

When the activists managed to move the statue 5 meters closer, about 350 more officers were called in to disperse the group.

By afternoon, the number of police officers had swelled to 3,000. The number of activists was estimated at 6,000.

The group had announced its plan to erect the statue last year, but they were rejected by the Ministry of Foreign Affairs, which feared the statue would hurt diplomatic relations with Japan. They instead recommended the group find another location.

The ministry then passed off the responsibility of halting the installation to the local government in Busan.

“Police should not block citizens whose sincere desire is to get an apology from Japan,” one activist shouted.

A police officer said the statue violated road and traffic regulations. “If they put it up, we have the authority to forcefully remove it immediately.”