South pulls back its speakers from border

South pulls back its speakers from border 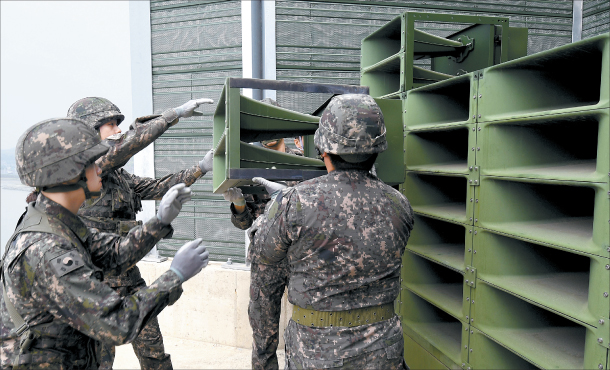 South Korean soldiers remove loudspeakers along the border with the North on Tuesday in Seoul’s first action to follow up on their summit deal last week. [YONHAP]

South Korea removed loudspeakers that blare K-pop and propaganda into North Korea on Tuesday, implementing an agreement that the two countries signed at their summit on Friday to cease broadcasts across the border.

The speakers, which served as weapons of psychological warfare, had already been silent since April 23, when the South Korean military turned them off in hopes of easing tension and creating a conciliatory mood ahead of Friday’s historic meeting between South Korean President Moon Jae-in and North Korean leader Kim Jong-un.

On Monday, Choi Hyun-soo, a spokeswoman for South Korea’s Ministry of National Defense, said the government would take another step by completely removing the speakers from the front line. The administration thought it was the “easiest way” to build military trust with North Korea, Choi said, adding that Seoul did not inform Pyongyang about its decision beforehand.

Although North Korea’s state media did not issue an official announcement on the matter, a Defense Ministry official said Tuesday that South Korea’s military had already detected signs that North Korea was removing its speakers as well.

Over the past decades, South Korea has turned the loudspeakers on and off in response to the political situation with North Korea. The military considers them as effective weapons of psychological warfare. Several North Korean soldiers who defected across the border have testified that they did so because of the broadcasts.

Before turning the speakers off, South Korea was continuously running broadcasts since January 2016 after the North conducted its fourth nuclear test. South Korean authorities said they could be heard from 10 to 20 kilometers (6 to 12 miles) away by North Korean soldiers and residents living near the border. The broadcasts mainly contained South Korean news, pop music and sound bites from television dramas, all content that is strictly forbidden in North Korea.

The North operates its own loudspeakers along the demilitarized zone, but they have much less impact because of an electricity shortage.

At their summit on Friday, Moon and Kim signed the Panmunjom Declaration, which included an agreement to “transform the demilitarized zone into a peace zone” by ceasing all hostile acts as of May 1, including dissemination of propaganda through loudspeakers and leaflet drops.

While the government can remove the speakers at any time, the leaflet drops are conducted by private groups, and they have refused to back down, citing freedom of expression.

Park Sang-hak, a North Korean defector who leads an activist group called Fighters for Free North Korea, said he could not understand why criticizing the North’s human rights violations was a hostile act. He vowed to continue sending materials across the border and pledged to do his next drop as early as this Saturday.

A senior official at South Korea’s Ministry of Unification, which handles relations with the North, urged civic groups to cooperate with the Panmunjom Declaration on Tuesday and suggested police might get involved in acts that defy terms of the declaration.

Another thorny issue that the government faces as it tries to comply with the declaration is mounting opposition from the main opposition Liberty Korea Party, which rejected Moon’s proposal on Monday to ratify the agreement in the National Assembly. Ratifying the declaration would make it legally binding and prevent future administrations from backpedaling on the agreement.

The Democratic Party has a good chance of ratifying the declaration if it can sway lawmakers in minor parties, but the Liberty Korea Party’s stark disapproval could sabotage efforts for bipartisan support.

History also disadvantages the Democratic Party. To date, no agreement with North Korea has ever been ratified by the National Assembly.