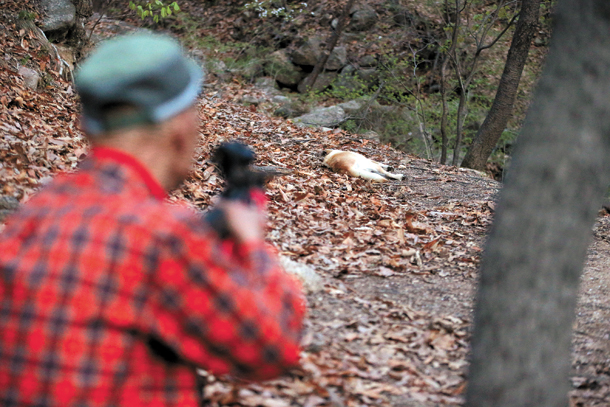 Bang Ki-jeong, head of the Wildlife Ecology Institute of Korea, captures a wild dog on the slopes of Mount Bukhan in Seoul. The dog has already been tranquilized. [SHIN IN-SEOP]

The hills around Seoul are favorite spots for hikers and picnickers but are also home to animals presenting new challenges to the city’s administrators: wild dogs.

According to city officials, these are the offsprings of dogs long abandoned by their owners as urban renewal projects kicked off around a decade ago. Redevelopment forced many people to relocate, and they left behind their dogs who found their way to the forests and hills around Seoul where they lost their domesticated ways.

As springtime arrives, these dogs are often seen in woods and hills searching for food. On occasion, they meander into urban areas to scavenge through residential trash. A rapid increase in their numbers over the last few years has led to an explosion of complaints, which have prompted the city government to look for solutions.

Bang Ki-jeong, 67, is a veteran dogcatcher and head of the Wildlife Ecology Institute of Korea. A known figure in the world of capturing animals, Bang is an expert in tagging wild animals with tracking devices to monitor their activity. But with a greater need for feral dog control in districts adjacent to Mount Bukhan, such as Eunpyeong, Seodaemun and Jongro Districts, Bang’s talents are now largely employed in catching dogs. His services are frequently commissioned by local governments, and he sets out more than three times a month to capture wild dogs.

On the evening of April 17 at around 7 p.m., Bang aims a tranquilizer rifle at a yellow dog in Geunrin Park behind Seonrim Temple in Jingwan-dong, Eunpyeong District, northern Seoul. After a quick bang followed by a short yelp, Bang finds the panting animal lying in the grass near the hiking trail.

The dog is transported to an animal protection shelter. Bang says that more and more feral dogs have been spotted near this residential park, where they search for food left behind by humans. The yellow hound was captured only 30 meters (98 feet) from the neighborhood’s badminton court.

Bang claims to have captured over 11 dogs in a single day in 2015, and his yearly total amounts to over a hundred dogs in Seoul alone. No matter how many he captures, Bang says, no one “can keep up with their breeding rate.”

Over the last three years in Seoul, over 12,337 complaints related to wild and stray dogs were reported. Some 1,516 cases were sightings of large feral dogs, while 1,056 cases involved injuries. Incidents of people bitten by dogs increased from only five cases in 2015 to 30 in 2016 and 25 in 2017.

Bang mentions a case in Seongdong District last year in which a local resident walking his own dog had to undergo seven weeks of treatment at a hospital after fighting off a pack of wild dogs.

Feral dogs are known to live in packs and engage in turf wars. Over the last three years, there were over 151 incidents in which wild dogs were observed in a pack of five or more. Half of these cases were observed in hills and mountains where hikers have been threatened by the animals. Over 200 are said to be living within the vicinity of Mount Bukhan alone.

Last year, the remains of a dog were discovered near a Buddhist temple in Eunpyeong District, a victim of a vicious battle between feuding packs. Not surprisingly, such incidents have instilled fear in nearby residents.

When a complaint is filed, the authorities call in Bang. On April 17, he started his job at around 2 p.m. with a survey of the area where a feral dog had been spotted. He followed a trail from Geunrin Park in Bulgwang-dong to Seonrim Temple in Jingwan-dong. Around 5 p.m., he opened up a can of anchovies and mixed it with dog food to use as bait.

“Anchovies have an exceptionally fishy smell and work well as bait,” he explains. The bait is poured around areas where the dog has been spotted. What follows is a game of patience - with a gun in hand.

Bang’s tranquilizer rifle has a range of around 30 meters, but its accuracy is not high. The feral dogs are also highly wary of humans and have long outsmarted any traps laid to capture them.

“Feral dogs are different creatures from strays,” Bang stresses, “and must be approached with far more caution.” Strays are abandoned by their owners and are familiar with human contact. Feral canines are often the offspring of abandoned dogs and have matured independently. In terms of size, feral dogs are usually better built and more handsome than their domesticated counterparts, since “smaller and uglier dogs cannot overcome the survival of the fittest,” according to Bang.

When captured, feral dogs are sent to animal shelters where some are put up for adoption. Yet, their wild nature prevents them from being acceptable pets, and the vast majority are euthanized after a period of 20 days.

The metropolitan and district governments have focused most of their administrative capacity on reducing the damage caused by these animals. Yet dealing with these creatures is proving to be a daunting challenge. The Animal Protection Act and laws on the protection and management of wild animals stipulate that these creatures be captured and put up for adoption rather than be killed on the spot.

Yet, growth in their numbers have raised concerns about their impact on the local ecosystem. Many of them are infested with mites or turn rabid, and these can spread to local wildlife. Feral dogs also disrupt the local animal population as they subsist on smaller animals like squirrels and deer.

Some activists are openly opposed to efforts to capture these animals in the first place. Lee Un-o, head of the animal control team in Seoul for the Korea Animal Rescue and Management Association, comments, “As much as people complain about these animals, others claim that they will look after these dogs and that they should not be captured. There is a direct conflict between these views.”

He added, “In the end, it is important that owners do not abandon their pets in the first place.”