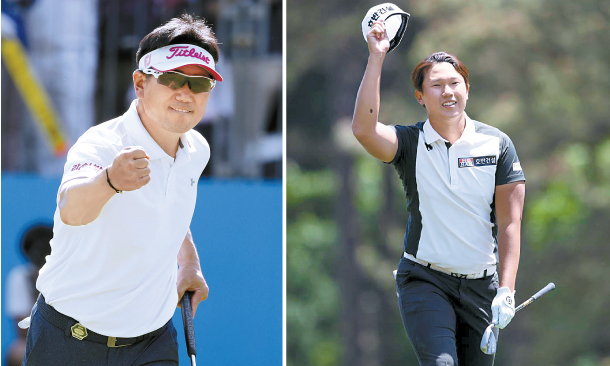 From left: Yang Yong-eun celebrates after winning The Crown on the Japan Golf Tour at Nagoya Golf Club in Togo, Aichi, on Sunday. Lee Sang-hee celebrates his victory during the 2016 GS Caltex Maekyung Open at NamSeoul Country Club in Seongnam, Gyeonggi, on May 7, 2016. [YONHAP]

The KPGA Tour’s first major tournament of the season, the GS Caltex Maekyung Open, will tee off today, with both Yang Yong-eun and Lee Sang-hee hoping to set a new record.

Yang, who won his first tournament since October 2010 on Sunday, is seeking to set another personal achievement with a win this weekend: back-to-back titles.

Yang is paired with Kim Kyung-tae and Poom Saksansin of Thailand in the first round. The group has received a lot of attention as Yang is playing with Saksansin. The Thai golfer is well known on the Asian Tour, having won tournaments in 2016 and 2017. During the EurAsia Cup in January, a biennial men’s professional team golf tournament between teams representing Europe and Asia, Saksansin left a strong impression by finishing the tournament with a record of two wins and one loss.

The EurAsia Cup also raised Saksansin’s profile in Korea - he was paired with Kang Sung-hoon in the foursome and four-ball matches.

While Yang may have had the most illustrious career of any participant at the Maekyung Open this weekend - he was the first Asian golfer to win a major championship on the PGA Tour in 2009, when he overcame a two-shot deficit to finish three shots ahead of Tiger Woods and win the 91st PGA Championship - he has been struggling in recent years, even losing his PGA Tour card in 2015. A victory on the Japan Tour last weekend suggests that his luck may finally be changing.

“I don’t think I have ever played well at the Maekyung Open,” Yang said. “For now, I’ll focus on making the cut.”

Though Yang is on a roll, coming straight off a victory in Japan last weekend, the NamSeoul Country Club has always been a challenge. Last year, Yang missed the cut, shooting three over par over the first two rounds.

Lee is starting off early at 7:58 a.m. along with amateur Han Jae-min and Shaun Norris of South Africa in the first round. Lee is one of the most dominant players on the KPGA Tour, winning three of four major championships and being named player of the year in 2012. Lee won a total of 800 million won ($742,704) in prize money last season, playing in both the Korean and Japanese tours.

As the defending champion, Lee is more than eager to be the first player at the event to defend his title.

“I heard that there hasn’t been a player that defended their title at the Maekyung Open yet,” said Lee. “At the 2013 KPGA Championship, I failed to defend my title by losing to Kim Hyung-tae in the playoff. For the first time, I want to defend the title. Successfully defending my title also proves that I’ve been preparing well [for the event].”

Aside from Lee’s title defense, his match up with Norris has also grabbed fans’ attention. Norris, who plays mainly on the European Tour, has won an event on the Japan Golf Tour already this year and has earned a spot to compete at the The Open. He is ranked higher than Lee, at 117, the highest among participants.

Jeon Ga-lam, who won the Tour’s season opener in April, will play the first round along with Bowen Xiao of China and Scott Hend of Australia at 11:30 a.m.

All four rounds will be broadcast live on JTBC Golf starting at 11 a.m. today.