South to begin discussions on a joint table tennis team

South to begin discussions on a joint table tennis team

The South Korean national table tennis federation said Wednesday it will begin discussions on forming a joint team with North Korea for this year’s Asian Games. 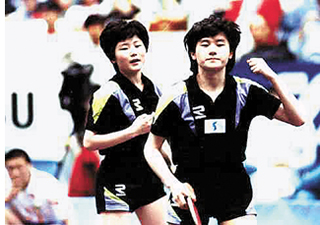 Li Bun-hui, left, and Hyun Jung-hwa compete on the joint Korean doubles team during the women’s team event at the 1991 World Table Tennis Championship in Chiba, Japan, on April 26, 1991. [YONHAP]

According to the KTTA, the performance improvement committee, headed by KTTA Vice President Lee You-sung, will go over measures that will “minimize the damage to South Korean athletes” should there be a unified squad.

One way to do so would be to expand the entries for the proposed Korean team.

If the unified Korean team is allowed to send extra athletes, then South Korean players won’t have to cede their spots to North Koreans.

At the PyeongChang Winter Olympics held in February this year, the Koreas formed a joint team in women’s ice hockey, and their squad carried 35 players - 23 South Koreans and 12 North Koreans - while all the other nations were limited to 23 players each. 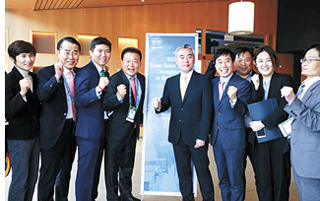 The Korean officials who helped Busan win the bid to host the 2020 ITTF World Team Table Tennis Championship during the ITTF Annual General Meeting in Halmstad, Sweden, on Tuesday. [YONHAP]

That expanded roster allowed the South Korean coaches to keep their original lineup of 23 South Koreans intact without having to cut anyone.

The KTTA is one of seven South Korean national sports federations to express interest in a joint team at the Asian Games, following a preliminary survey of 40 sports bodies by the Sports Ministry. And table tennis carries extra symbolic significance in terms of inter-Korean sports exchanges, because it is the first sport in which the two Koreas assembled a joint squad in an international competition.

For that 1991 competition, the ITTF granted Korea extra spots for singles and doubles. The KTTA said it has maintained a close relationship with ITTF President Thomas Weikert and is hopeful it can receive similar benefits this time.

While in Sweden, the KTTA officials are also hoping to meet with Ju Jong-chol, secretary general of the North Korean Table Tennis Association, who is in Halmstad with his national team.

The KTTA is hoping to have some sort of an exchange during the Pyongyang Open in June and the Korea Open in Daejeon, 160 kilometers (99 miles) south of Seoul, in July.

This year’s Asian Games are scheduled for Aug. 18-Sept. 2 in Jakarta and Palembang, Indonesia, and a KTTA official said there will be enough time left once the Koreas come to an agreement.

“Before the Chiba worlds, the athletes from the two Koreas trained for 46 days and grabbed one gold, one silver and two bronze medals,” the official said. “If we can minimize the damage to South Korean athletes, we should be able to field a strong joint team.”