Gov’t braces for trade with North

Gov’t braces for trade with North 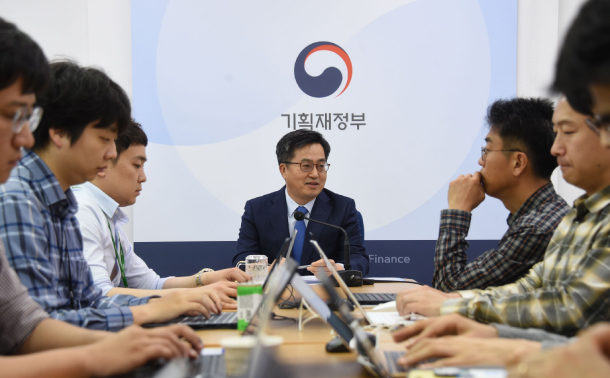 Kim Dong-yeon, Korea’s minister of strategy and finance, talks with local reporters on Wednesday at the government complex in Sejong. [YONHAP]

As relations between the two Koreas warm, Seoul is gearing up to create new economic ties with Pyongyang, according to the South’s top economic official.

“Inter-Korean economic cooperation will create tremendous synergy,” said Kim Dong-yeon, South Korea’s minister of strategy and finance, during a meeting with local reporters on Wednesday at the government complex in Sejong. “The two Koreas exchanging human and material resources and increasing spending and investment could [ultimately] improve the quality of life of the general public.”

The finance minister said the government is bracing for a number of different events, including the U.S.-North Korea summit, that could unfold in the coming weeks before it decides on its next move, although he didn’t elaborate further.

“Internally, we are preparing details such as what and how fast the government should prepare and how it will ready the necessary finance,” Kim said.

It’s likely that Kim will head the committee that oversees the economic exchanges between the North and the South. After the North and South’s joint declaration on Oct. 4, 2007, it was Kwon O-kyu, then the minister of finance and economy, that supervised inter-Korean economic cooperation as chief of the committee.

According to Kim, the so-called inter-Korean cooperation fund, a government fund established in 1991 that is devoted to projects that promote ties and exchanges between the two Koreas, has about 1 trillion won in its budget for 2018, with about 350 billion won assigned specifically for economic projects. The fund is sourced from the government budget and public sector funds and is under the supervision of the Export-Import Bank of Korea, a state-run export credit agency.

“How much money there is in the fund is not an important variable here,” Kim added. “[How the government will spend it and how it will deliver additional funding] is just an extension of the Panmunjom Declaration and the work we did just before the inter-Korean summit.”

“However, inter-Korean economic cooperation must be carried out in a calm and orderly fashion, and we need consensus from the international community [before making more concrete moves],” said Kim, referring to the economic sanctions against North Korea that must be lifted before South Korea could initiate any economic exchanges with the North.

The thawing relations between the two Koreas is having a positive impact on the South, lowering the geopolitical risk factors that often affect the country’s credit rating, according to Kim, who met with the major credit agencies Moody’s, Standard & Poor’s and Fitch Ratings during his visit to Washington last month.

“It’s a good sign for us, but we have to look at what will happen in the mid to long-term before positivity can be reflected in the country’s credit rating,” he said.

When asked about how the South Korean government would reveal the records of its intervention in the foreign exchange market to other countries, the finance minister firmly said that the decision would be made independently.