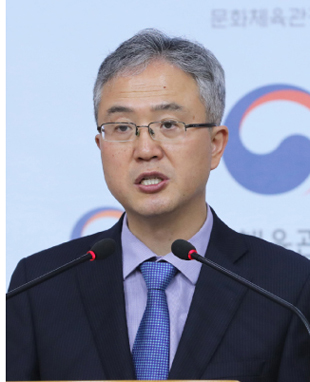 Lee Woo-sung, an official at the Ministry of Culture, Sports and Tourism, gives a briefing about the new five-year public design project at the Government Complex in central Seoul on Wednesday. [YONHAP]

The Ministry of Culture, Sports and Tourism announced Wednesday a five-year initiative to focus on design projects that benefit the public.

Some of them include painting so-called “Yellow Carpets” in front of pedestrian crossings near elementary schools so that drivers pay more attention to crossing children. Currently, strips of multiple colors are used on the fences to indicate school zones, which are not as eye-catching, explained the ministry.

Express bus terminals and the complicated bus timetables at the terminals throughout the country will also be redesigned and renovated.

There are about 49 projects across 288 cities and counties throughout the country and all of the projects, according to the ministry, focus on “improving citizen’s quality of life through public design that puts the people’s safety and convenience first.”

So far, most public design projects have been created in isolation and haven’t been adapted elsewhere, the ministry said, stressing that the new makeover plans have been drawn up with the true meaning of public design in mind.

Moreover, as different local governments across the country have their own regulations and management guidelines regarding public design, there is no “unified look,” Lee Woo-sung, an official from the Culture Ministry, said. Lee added that from now on, final decisions and management will be made under one roof.

The ministry also said it will closely work with nine other ministries such as the Ministry of Land, Infrastructure and Transportation and the Ministry of Public Administration and Security, so that projects such as installing new bus stops or street lights can be promptly applied.

One of the most grand design makeovers included in the plan concerns the safety of women in the country.

The Culture Ministry said it will work together with the Ministry of Gender, Equality and Family to come up with a design that minimizes the malfunction of emergency bells that are installed in remote areas as well as public toilets, explaining that there have been many complaints that the bells do not work. Locations of CCTVs, streetlights and nighttime patrol routes will also be redesigned so that they all can serve their purpose.

Information boards and signs indicating Korea’s cultural heritage and tourist spots such as walking trails in Seoul and other parts of the country will also get a unified look so that visitors, no matter where they are in the country, can identify, explore and enjoy Korean history and culture.

Some Koreans may look forward to new passport covers as the government also plans to change their design by 2020. The new ones, according to the ministry, will be more suitable for electronic passports that most people use today.

“I really believe that public design is a good means to increase the quality of life as well as safety of our citizens,” said Culture Minister Do Jong-hwan. “Public design can slow down cars in front of school zones and improve outdoor activities for disabled people, the elderly or parents with strollers.”

For the public design makeover, the government will use 9.7 billion won ($9 million) of its budget this year and a total of 139.7 billion won by 2022.