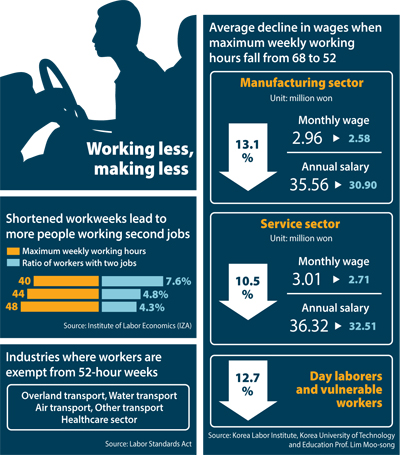 Korea’s executives may soon have to start driving their own Mercedes and Ssangyong Chairmans.

A law mandating a maximum number of hours in the workweek could lead to problems for professions that have overtime built into them, such as chauffeurs.

From July 1, companies with over 300 employees will not be able to make workers toil for more than 52 hours a week.

As a response, some companies are letting go of chauffeurs altogether, since picking up executives from their homes and driving them home in the evenings after office hours or from dinners and drinking sessions require long working days.

“Private chauffeurs usually have long working days because they have to pick up and drop off executives at their home,” explained a representative of a large company that plans to fire all chauffeurs except for its CEO’s. “Once the revision to the Labor Standards Act goes into effect, we would only be able to request three working days per week from the chauffeurs [to avoid exceeding the maximum working hours].

“Most of the chauffeurs we had were on contracts so we will have to cancel them,” the representative added. “Those who were on open-ended contracts will be transferred to different departments. But I assume they will soon leave the company as they don’t have the skill sets we need.”

Some companies plan on retaining their chauffeurs, but restricting their working hours to 9 a.m. to 6 p.m.

Just like other people, executives will now have to drive themselves, but they will be reimbursed for chauffeur hire fees to be driven home after drinking with clients.

The shorter working week is intended to promote a better work-life balance for Korea’s toiling masses, but some chauffeurs are simply getting paid less - or losing their jobs altogether.

“In the past, we got a lot of overtime pay for working at night,” explained one private chauffeur who’s keeping his job but will work fewer hours. “If an executive had a late dinner meeting or went to play golf on the weekends, I would receive some hundreds of thousands of won extra, but now that’s not possible.”

This chauffeur is resorting to working night shifts as a driver-for-hire to bring home the same level of earnings he enjoyed before.

Many workers in the manufacturing and service sectors are also facing lower take-home pay thanks to the shorter hours.

With maximum working hours down from the current 68 to 52 a week, the average monthly wage decline for all working people across all sectors is projected to be 377,000 won ($352), according to the National Assembly Budget Office.

Germany’s IZA, or Institute of Labor Economics, published a report in 2014 arguing that if all workers were restricted to 40 working hours a week, 7.6 percent of them would work two jobs to compensate for the lost hours. If the limit was 48 hours a week, they would be more content with their wage and fewer people would get second jobs.

“Because the law that shortens the workweek is so rigid,” explained Korea University Prof. Park Ji-soon, “it may rattle the framework of the job market. Jobs like private chauffeurs are at the brink of extinction.”

Many complain that the government is not addressing the fallout coming from the changes.

“People in various occupations including chauffeurs are asking us what will happen to them now with the shortened working hours,” said a representative of a provincial office of the Ministry of Labor and Employment. “We are frustrated because the Ministry hasn’t given us guidelines [on how to respond] yet.”

The Ministry is also under fire for not having adequately prepared for the consequences that shortened hours could have in the labor market. It announced it would come up with a policy response to these concerns by June, just before the revision is enforced.