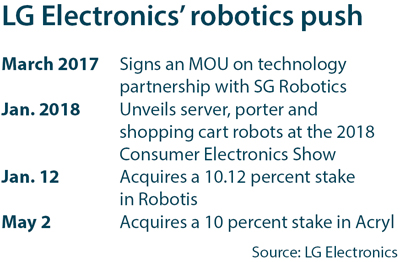 LG Electronics bought a 10 percent stake in a Korean artificial intelligence start-up that specializes in recognizing human emotions, the company said on Wednesday.

The electronics giant said on Wednesday it acquired a stake worth about 1 billion won ($929,000) in Acryl, which recently issued new shares to attract investment. The company has developed advanced emotional recognition technologies powered by AI.

LG said it plans to accelerate its robotics business, one of its targets for future growth, through Acryl’s expertise in emotional recognition, which is one of key pillars of robotics.

“We plan to prepare future businesses in an exacting manner to become a leader through open innovation with other parties,” said Kim Sung-wook, vice president of the global open innovation division at LG Electronics.

The company has been collaborating with third parties such as universities, research centers and start-ups in AI, robotics and autonomous driving.

Acryl was established in 2011 by a group of academics from the Korea Advanced Institute of Science and Technology. Jonathan, the platform it developed, uses a deep-learning hyperneural network to recognize and analyze emotions, images, text and audio to come up with answers that aren’t just factual, but match the mood of the person asking a question.

LG has recently invested in and cooperated with other local robotics firms. The company signed a technological partnership with SG Robotics, a robotics start-up launched by researchers and students at Sogang University, in March last year. SG Robotics integrated AI into its robot management software and supplies basic technologies and components to other robot developers.

In January, LG bought a 10.12 percent stake worth around 9 billion won in Robotis, a 19-year-old company that specializes in robotic solutions as well as educational and toy robots.

“We are not focusing on just a single company, but diversifying our portfolio, which is a strategy to foster our robotics business,” said an LG spokesperson on the company’s relatively small investments in many robotics companies.

Earlier this year, LG unveiled three specialized server, porter and shopping cart robots at the Consumer Electronics Show in Las Vegas to show off its edge in the field. LG Vice Chairman Jo Seong-jin told reporters during the tech show that LG will launch a hub robot for homes by June. Hub robots can control a wide variety of devices at home via a Wi-Fi network - from TVs and refrigerators to air conditioning, lights and even security systems.