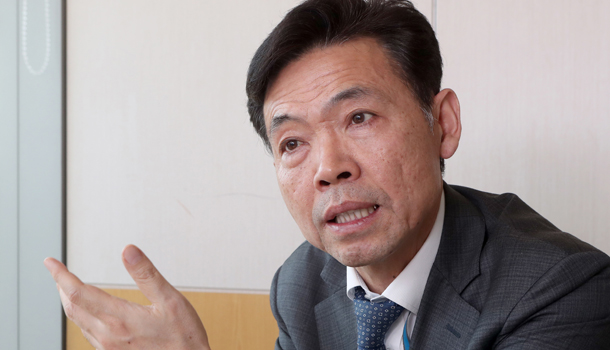 President Moon Jae-in’s economic policy, which he has taken to calling “J-nomics,” emphasizes the distribution of wealth over growth in a clear departure from previous conservative administrations. His government has pushed forth the concept of “income-led growth,” which hinges on households making more and spending more.

On the surface, Finance Minister Kim Dong-yeon appears to be carrying out Moon’s vision, but many say the actual leader is Hong Jang-pyo, the administration’s chief economic adviser and an economics professor at Pukyong National University.

One year into the Moon administration, the JoongAng Ilbo sat down with the economic adviser to assess the government’s progress so far — including a minimum wage hike, increased welfare for senior citizens and the placement of public-sector contract workers on permanent payrolls. Below are edited excerpts from the interview.


Q. What do you make of J-nomics in general? There was criticism and controversy surrounding the initiative.

A. I think that is because Korean people are not familiar with the concept of income-led growth. In fact, other countries have had similar policies. If you look at Abenomics, it also comprises a wage increase and so does China’s policy. I hope people will see that as a shift in policy direction.


How would you evaluate the government’s first year?

We have gone from a transition period to a stage where policy pledges are going into effect. In terms of figures, the economy grew 3.1 percent in 2017 and is expected to register 3 percent growth this year and 2.9 percent growth next year. Given that the country failed to achieve growth in the range of 3 percent in recent years, we are on the right track.


Some people are worried about the side effects of J-nomics and say the minimum wage increase was so drastic that it led to a rise in job losses. How would you address that concern?

I know there are different arguments, but it is too early to draw conclusions about the effect of the wage hike. The issue of whether the higher minimum wage contributes to job creation remains controversial. No sound evidence exists for both sides. But when we look into cases abroad, job numbers can go down in the short term but increase in the mid-to-long term. Those who argue that the hike led to unemployment only point to several cases at specific companies.

There are structural and circumstantial factors [for high unemployment]. As for the structural matter, excessive competition could affect the rate. The decline in Chinese tourism in the wake of the diplomatic dispute over the Terminal High Altitude Area Defense system also played into the trend.


Critics argue that the minimum wage increase caused prices to rise and that the burden of paying higher wages translated into an increase in delivery fees.

Most of the cited cases are also specific cases. I don’t think such cases pushed up consumer prices. Inflation moves in a stable manner. We will finish a comprehensive study [about the effects of the wage increase] by the end of May. The government will sift through the relevant data and different effects, and later factor in the results when we decide next year’s minimum wage. We are preparing for it more thoroughly this year.


Another policy is to provide about 10 million won ($9,288) annually for young people working at small and medium-sized companies. But that raised concerns about wage distortion in the private sector and critiques that it won’t be sustainable. What do you think?

I know that young people avoid smaller companies not just because of the salary but also the corporate environment and structural issues, so I want to emphasize that the subsidy is a temporary measure. We provided the support to help those born between 1991 and 1996 who will likely face a tough job market through 2021. Otherwise, they will turn to government positions. A more fundamental solution is to enhance the standing of small and medium-sized companies. In line with that goal, the government has invested a sizable amount of money on fostering tech start-ups. I believe such policy support can make small and medium-sized companies strong.


Still, industries are complaining that the government doesn’t seem serious about its “innovative growth” initiative and they’re not feeling the change. What is your thought on the view?

President Moon stresses innovative growth, deregulation and organizational reform. The focus is different from the previous approach aimed at growing all industries. We have prioritized eight sectors to focus our resources on, including fintech, drones and autonomous cars. They are not industries but specific businesses and products. The list is linked with the intention of fostering start-ups.


But stiff regulations get in the way of innovation. How can the government ease the barrier?

Let’s take drones for example. The government started loosening regulations and lifted restrictions on how high drones can fly. It is rare, even compared to other countries, for the government to ease multiple regulations in such a short period of time. We will work to address regulatory issues in other sectors, except for areas related to environmental and public safety.


Do you agree that the major driver for income-led growth should be domestic consumption?

Exports alone are not sufficient enough to drive the Korean economy because external uncertainties weigh down on it too much. We want to incorporate domestic consumption, and to establish the basis for rising consumption, the government is focusing on creating jobs, raising the minimum wage and stabilizing home prices.