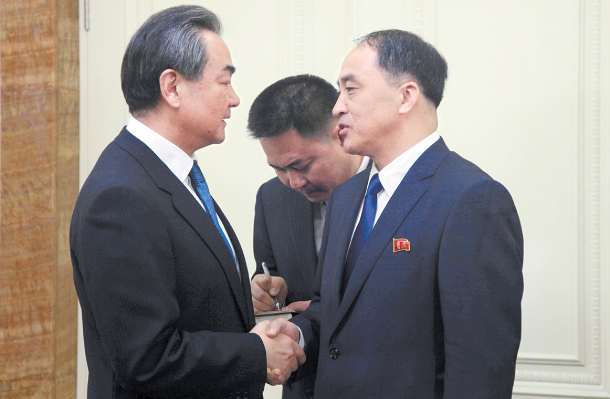 Chinese Foreign Minister Wang Yi kicked off a two-day trip to Pyongyang on Wednesday, the first such trip in over a decade, ahead of a high-stakes summit between North Korean leader Kim Jong-un and U.S. President Donald Trump.

Wang departed from Beijing Capital International Airport Wednesday morning and arrived in Pyongyang later that day. He was greeted at the airport by North Korean Vice Foreign Minister Ri Kil-song on a visit that comes on the heels of the first inter-Korean summit in 11 years on Friday between South Korean President Moon Jae-in and North Korean leader Kim Jong-un.

The Chinese Foreign Ministry announced Monday in a statement that Wang would visit Pyongyang Wednesday and Thursday at the invitation of North Korean Foreign Minister Ri Yong-ho.

A Chinese foreign minister last visited North Korea in 2007, and Wang, also state councillor, is the most senior Chinese official to have visited Pyongyang in recent years.

During his visit, Wang is likely to be briefed on the results of the inter-Korean summit, what to expect from the upcoming summit between Kim and Trump, and the broader issues of denuclearization and how to establish a peace regime on the Korean Peninsula.

During the inter-Korean summit, Moon and Kim agreed to pursue a trilateral summit with the United States, which could expand to a four-party summit including China to discuss formally ending the 1950-53 Korean War by replacing the current armistice agreement with a peace treaty within the year. Thus, Wang is likely to ask North Korea for the early inclusion of China in such talks.

Wang’s visit comes amid a warming of relations between Beijing and Pyongyang after North Korean leader Kim made a surprise visit to China at the end of March in his first visit abroad since he assumed power at the end of 2011. Kim had a summit with Chinese President Xi Jinping in Beijing after a long freeze in diplomatic ties because of Pyongyang’s nuclear tests and Beijing’s enforcement of stringent sanctions measures.

Wang is likely to meet with Kim during this visit, though the Chinese Foreign Ministry has not formally confirmed it.

Wang may also discuss with Ri further details of President Xi’s planned visit to North Korea, reciprocating Kim’s visit to China, which is expected to take place in June.

There is a possibility that China may also propose a resumption of the long-stalled six-party talks, which were halted in 2009 after Pyongyang walked out. The denuclearization talks involved the two Koreas, China, Japan, Russia and the United States.

Trump said that the location and date of the North-U.S. summit are going to be revealed very soon.

“I want to get peace - it’s the main thing,” Trump told reporters at the White House Tuesday, on his upcoming summit with North Korea. “We’re setting up meetings right now, and I think it’s probably going to be announced over the next couple of days - location and date.”

Trump hinted on Monday that a meeting with Kim Jong-un could take place in Panmunjom, the truce village at the inter-Korean border.