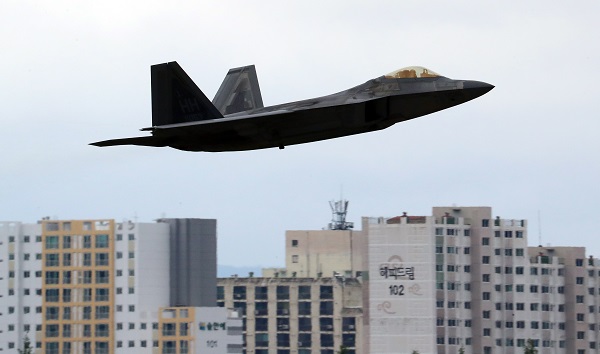 A U.S. F-22 Raptor fighter jet takes off from an Air Force Base in Gwangju on Wednesday in a joint training known as the "Max Thunder." The exact number of dispatched stealth fighter jets and their arrival time have not been released, but reportedly eight Raptors landed in Gwangju. [YONHAP]


President Moon Jae-in said Wednesday the issue of U.S. military forces stationed in South Korea had nothing to do with the signing of a peace treaty that would formally end the 1950-53 Korean War, in a rare public rebuke of his special adviser on inter-Korean policy, Moon Chung-in.

The two are not related.

President Moon’s rebuke was directed at a column published by Foreign Affairs on Monday in which his adviser described the inevitable withdrawal of U.S. forces from South Korea should a peace treaty be signed, which Moon has been forced to deny before.

“The matter of the USFK [United States Forces Korea] belongs to the matter of the Korea-U.S. alliance. It is not related in any aspect to the signing of the peace treaty,” the president was quoted as saying by the Blue House spokesman, Kim Eui-kyeom.

Moon’s chief of staff, Im Jong-seok, called adviser Moon and cautioned him about “causing confusion” about the policy direction of the Moon government.

In a column entitled “A Real Path to Peace on the Korean Peninsula,” the former professor of international relations said it would be “difficult to justify” the U.S. military presence in the southern part of the peninsula when the Korean War is formally ended with a peace treaty.

“What will happen to U.S. forces in South Korea if a peace treaty is signed?” wrote Moon. “It will be difficult to justify their continuing presence in South Korea after its adoption.”

There are some 28,000 U.S soldiers stationed in South Korea.

Moon’s commentary contradicts what President Moon has been stressing in recent weeks: that North Korea is not making demands that the U.S. can’t accept in return for its nuclear disarmament, such as the withdrawal of U.S. forces from South Korea.

The issue of whether the U.S. forces will continue to stay in the South is a sensitive one for many, especially among those suspicious of the North’s motive for engagement.

The North had previously called for the withdrawal of the U.S. military when a peace treaty is signed to end the war.

For North Korea skeptics, Pyongyang’s demand for the USFK withdrawal meant that the Kim regime was still holding onto its objective of unifying the two Koreas under its communist rule, just as Kim Il Sung, the grandfather of current leader Kim Jong-un, initiated the war 68 years ago that left much of the peninsula in ruins.

Seoul and Washington consider such a demand non-negotiable.

Aware of the sensitivity of the issue, the Moon government has been emphasizing that North Korean leader Kim is not repeating a demand his father and grandfather made. Then, to the chagrin of the Blue House, adviser Moon’s column came out, directly contradicting what the president has been saying.

Moon said on April 19 during a meeting with local media executives that if Kim had made such unacceptable demands, it would have been impossible to agree on holding a summit meeting between Kim and U.S. President Donald Trump.

A senior presidential official downplayed adviser Moon’s column, saying the president was not “bound by his words.”

“President Moon already addressed the issue of the USFK before. His position is that the USFK should continue its presence here after the signing of the peace treaty,” said the official.

“The government’s position is that we need the U.S. forces in Korea serving their role as a mediator when powerful neighboring countries such as China and Japan are engaged in military tension and confrontation.”

It is not the first time Moon’s adviser made a stir. In February, he said the U.S. forces would have to leave the country if President Moon told them to do so because he exercised military sovereignty as commander in chief, fanning criticism that such a remark would only cause a rift between Seoul and Washington.

While adviser Moon’s comments have sparked controversy, his remark in February that the joint Seoul-Washington military drill that was postponed on the occasion of the PyeongChang Winter Olympics would begin in early April proved to be accurate, boosting his credibility.

The issue of the U.S. military presence in the South could be raised down the road when official talks begin to sign a peace treaty.

China is expected to join discussions as it was one of three signatories of an armistice treaty on July 27, 1953, that halted the war but didn’t end it, leaving the two Koreas still technically at war.

The treaty was signed by the U.S.-led United Nations Command on behalf of South Korea, and by the Chinese and North Korean militaries.

Some worry that Beijing could raise questions about the continuing presence of the U.S. forces in the South when the state of war is over.

But Cheong Seong-chang, a senior fellow at the Sejong Institute specializing in North Korea affairs, said Beijing would still accept a peace treaty that doesn’t change the status of the USFK, though it would prefer a South Korea without U.S. forces.

“China will not accept the USFK presence in a unified Korea as it will see it as a direct challenge to its national security. But in a divided Korea, China would see the continuing presence of U.S. forces in Korea as acceptable and somewhat inevitable within the ongoing division.”

On transitioning the armistice into a peace treaty, a senior Blue House official told reporters that the South and North could declare “an end to the Korean War” as a “political statement” before entering talks into signing a peace treaty.

“Since it will be difficult to replace the armistice with a peace treaty right away, a declaration of ending the war could occur in between,” said the official, speaking on the condition of anonymity.

On the highly anticipated summit between Kim and Trump, the real estate mogul-turned-president said Tuesday in the White House that the location and date for the historic meeting would be “announced over the next couple of days.”

Trump also spoke highly of Moon’s remark earlier this week that Trump should win a Nobel Peace Prize for opening talks with Pyongyang. Moon said all he needed was setting in place a “peace” on the peninsula and indicated he wouldn’t care about winning the coveted prize.

“I thought it was very generous of President Moon of South Korea to make that statement.”