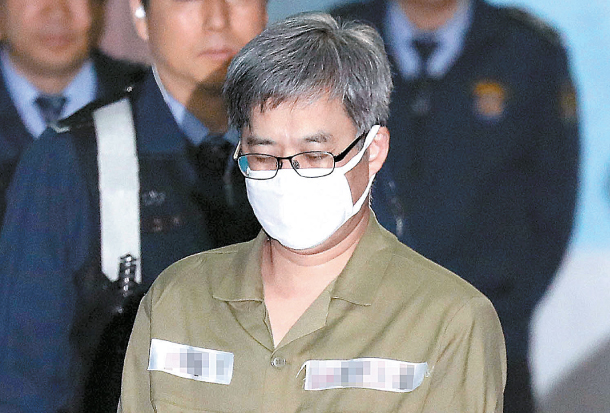 A political blogger who is on trial for manipulating online opinion against the president admitted to the charge on Wednesday at the Seoul Central District Court.

Kim Dong-won, also known by his online alias Druking, was arrested on March 25 for allegedly using software to fiddle with the number of “likes” on Naver comments. Naver is the country’s most widely used portal site for news stories, and the comments that Kim’s team targeted were aimed at the Moon Jae-in administration.

According to police, on the night of Jan. 17 and into the next day, Kim and his accomplices used a program to increase the number of likes on comments critical of President Moon’s decision to field a joint hockey team with North Korea during the PyeongChang Winter Olympics. The act was allegedly done as retaliation for the Moon administration denying a patronage post to one of Kim’s acquaintances.

Kim faces one charge of “obstructing business,” a punishable criminal offense in Korea. Two of Kim’s accomplices face the same charge of interfering with Naver’s operations. They, too, have admitted to the charge. Police arrested a third accomplice, but he has yet to stand trial.

Although Kim admitted to the charge, prosecutors requested the court proceed with his trial, saying they needed more time to sift through evidence. Their investigation could unearth more accomplices, they said, because Kim runs an online community with around 4,560 members.

The court set another trial date of May 16 but reminded prosecutors that Kim had the right to a speedy trial.

In the courtroom, prosecutors appeared to struggle with questions about the software that Kim allegedly used to manipulate opinion on Naver.

“What exactly is this program that the accused allegedly used?” Judge Kim Dae-gyu asked during the trial on Wednesday.

“We intend to modify the indictment to describe that in detail,” said prosecutor Lee Hye-hyeon.

“Does using this program mean one person with one account can create multiple ‘likes’ on one post?” the judge asked.

“That is also still being investigated,” Lee said.

The judge had to ask Kim’s defense attorney to explain the program.

“As far as I know, even with the program, one user can click ‘like’ once,’” Kim’s lawyer said. “But what the program does is that it allows users to automatically click like instead of manually making the clicks. So our claim is that using the program did not obstruct Naver’s business.”

A separate police investigation into Kim’s alleged ties with a ruling party lawmaker is ongoing.

From November 2016 to March this year, Kim allegedly exchanged text messages with Rep. Kim Kyoung-soo, a confidant of President Moon, on Telegram, a mobile messaging app.

Of particular interest to police is a string of messages sent between January and March last year, in the midst of a presidential election. The messages included links to websites and articles favorable toward Moon, who was then a presidential candidate. Rep. Kim Kyoung-soo frequently asked Kim Dong-won, the blogger, to share them, and the blogger usually replied that he would handle it, police said.

After Moon was elected, a member of Kim Dong-won’s online community allegedly asked the administration for a consul general post in Osaka, Japan.

One of Rep. Kim Kyoung-soo’s aides at the time, a man surnamed Han, then received 5 million won ($4,650) from a member of the community. Han claims the money was borrowed for personal use and that he returned it after Kim Dong-won was arrested.

However, police discovered that Kim Dong-won had sent a text message to Han in March mentioning the 5 million won transaction and threatening him after the alleged deal for the consular post fell through.

“If the Democratic Party continues to refuse to pass the bill, we suspect it is because the party is afraid a big scandal involving President Moon that will emerge out of the independent counsel probe,” said Kim Dong-cheol, floor leader of the Bareunmirae Party. “Then the so-called Druking-Kim Kyoung-soo-gate may have to be called ‘Druking-Moon Jae-in-gate.’”