The Korean men’s ice hockey team will begin competing at the World Championship in Denmark on Saturday with the sole goal of retaining their spot in the International Ice Hockey Federation’s (IIHF) top division next year. 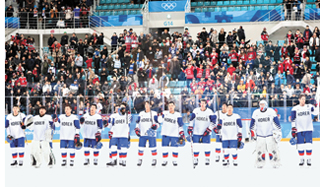 The Korean men’s ice hockey team greets fans after their preliminary-round match against Canada during the PyeongChang Winter Olympics at the Gangneung Hockey Centre in Gangwon on Feb. 18. [YONHAP]

Led by head coach Jim Paek, Korea was promoted to the top division for the first time in the country’s history after finishing runner-up at last year’s IIHF Division I Group A tournament.

At the World Championship, 16 countries are assigned to the top division, and the preliminary round is divided into two groups. The bottom-ranked teams from each group after the preliminary matches will be relegated to IIHF Division I Group A next year, which Korea was in until last year.

Since the promotion-relegation system was first introduced at the IIHF Championship in 2002, there hasn’t been a team that managed to survive in the top division in their first year of promotion.

Korea is assigned in Group B along with Canada, Denmark, Finland, Germany, Latvia, Norway and the United States.

Unlike last year, when the team’s goal was to win the event, this year, their goal is just to survive. The rankings after the preliminary round will be determined by points, where each team gets three points for a win, two points for an overtime victory and one point for an overtime loss.

Based on past results, Korea will need to earn at least six points to avoid relegation. Teams with less than six points have historically been relegated to a lower division.

Although Korea lost all four of its matches at the PyeongChang Winter Olympics, the team put up a good fight against top-ranked countries. At recent friendly matches in Europe, Korea lost 1-2 to 10th-ranked Slovakia and 3-4 against No. 7 Germany.

Korea enters the tournament as the lowest-ranked team, at 19. Not only that, the tournament will be a lot tougher than the Olympics since NHL players were not competing.

Korea’s first game will be against fourth-ranked Finland, to which Korea lost 2-5 at the Olympics. The team had put up a good fight, with goals by Brock Radunske and Ahn Jin-hui.

This time, Finland will make the game a lot tougher for Korea with the return of its star NHL players - Mikko Rantanen of the Colorado Avalanche, Mikael Granlund of the Minnesota Wild, and Teuvo Teravainen and Sebastian Aho of the Carolina Hurricanes.

After Finland, Korea faces an even tougher opponent: No. 1 Canada. Without its NHL players, the Canadian team had to walk away with a bronze medal at the PyeongChang Winter Olympics, but they may be more determined than any other team to redeem themselves: all 23 players on the roster are currently active in the NHL. The United States is also expected to be a formidable opponent.

With such a tough field, Korea’s division status will likely be determined based on its results against 13th-ranked Latvia and 14th-ranked Denmark, the two-lowest ranked teams before Korea.

While most of the countries have strengthened their rosters, Korea will mostly compete with the same players from the PyeongChang Winter Olympics. The team has retained their starting players, and only two minor changes have been made: defender Cho Hyun-gon has been replaced with Asia league rookie Song Hyung-chul, and Lee Yeon-seung has been added as a new third-string goalie.

Korea’s first game at the World Championship will start on Saturday, against Finland at Jyske Bank Boxen in Herning, Denmark.