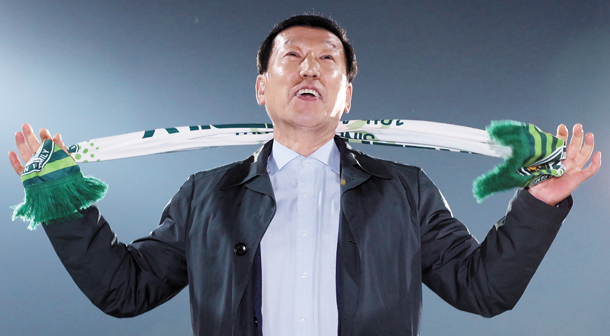 Choi Kang-hee, the manager of the Jeonbuk Hyundai Motors, is relishing the limelight as the most winningest coach in Korean football history.

At 59, he’s also the youngest coach to set the record.

Choi’s magic number is 211. The coach has experienced 211 wins as head coach of the Jeonbuk Hyundai Motors.

Jeonbuk is dominating the K League this season with 10 wins and one loss and has advanced to the round of 16 at the Asian Football Confederation’s Champions League. In addition to Jeonbuk’s lead, the club is en route to setting a record for winning streak, as they are currently tied for the record at nine.

Since Choi became Jeonbuk’s manager in 2005, he has led the team to five K League titles and two Champions League titles. Choi has a lot to be proud of: the club was the bottom-ranked team in the league when he took it over. “During my first year as head coach, I had more losses than wins,” Choi said. “I thought I would get fired in my first six months in the role.”

At the beginning of the 2008 season, Choi attempted a generational change, releasing most of the team’s older players, but it didn’t help much. The team started that season with a win, a draw and four losses. Choi had to take some harsh criticisms from fans. “I uploaded a handwritten letter on our club’s website asking fans to wait,” he recalled.

After the letter, the team saw some slight improvement with nine wins, two draws and three losses, good enough to get to the playoffs.

But things really didn’t pick up until Lee Dong-gook joined Jeonbuk in 2009 as a striker. Many fans disapproved of Choi’s decision to sign Lee, but the manager eventually proved them wrong. Lee turned out to be one of the team’s greatest assets. That first season with Jeonbuk, he was the league’s top scorer, notching 20 goals in 27 matches, and Jeonbuk won the Champions League that year.

Since last season, Lee has been getting a lot less playing time, often going in as a substitute for younger, more agile players, but he is still proving his dominance. Last October, he made his 200th career goal even with the limited playing time, and for the first time in almost three years, Lee played for the national team.

“All my records were made by my players, especially Dong-gook,” Choi said.

“I was shocked when I first watched a football game in Germany,” Choi said. “When a player made a back pass to a goalkeeper, the crowd started booing at the players. Even a weak team was playing aggressively against a strong team like FC Bayern Munich. But the crowd was still cheering for the losing team when they lost 1-4.”

After watching the game, Choi decided to be more aggressive in his coaching. Even when his team was leading 2-0, he still tells players to try and score another. Although Choi used to play defense when he was a player, his coaching style is more like the strikers - all bite.

From his successful coaching career, Choi has received high offers from teams in the Chinese league, but he has refused them all. He says he can’t leave because of the fans, who once distrusted him but now adore him.